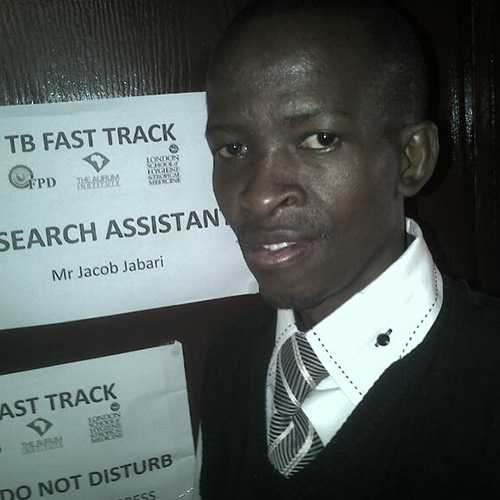 Jacob Jabari and Nkonzo Khanyile can’t wait for the weekend of Saturday June 29 2013. On this day, they will be among a few South Africans who will get to meet U.S. President Barack Obama in a town hall for Young African Leaders at the University of Johannesburg – Soweto Campus. President Obama is visiting South Africa from Friday June 28 to June 30, 2013.

But who are Jacob Jabari and Nkonzo Khanyile?

Jacob is a 38 year old husband and father of three children. He works as a Research Assistant at the Foundation for Professional Development (FPD) – an organization supported by the U.S. President’s Emergency Plan for AIDS Relief (PEPFAR). He has also worked as a HIV and TB counselor before. But it is not just his family and job that make Jacob proud of who he is. He has come a long way.

“In November 1999 I had a severe cough and I had lost weight drastically in a short period of time. So I decided to go to the local clinic to test for tuberculosis (TB). I tested negative for TB and the nurses suggested an HIV test. It came back positive. I was so stressed and depressed I decided to quit my job as a teacher because I was no longer productive” he says. For seven years Jacob remained unemployed. He survived with small stipends he received from volunteering for several non-governmental organizations around Pretoria. “The 1990s were a tough era for people living with HIV. People who had HIV it didn’t talk about it and judged harshly, condemned and avoided by others”.

“In January 2008, a friend encouraged me to disclose my HIV status publicly. I thought it was a good idea to reveal my status publicly, because I had just lost my cousin to AIDS. My cousin had not told anyone that he was HIV positive, not even me, although I had shared with him and the rest of my family members that I was living with HIV. I only got to understand that he had died of AIDS when shortly after his death, I discovered antiretroviral pills (ARVs) in his room – I realized that he had been taking them secretly. This is why I decided to tell my world that I’m HIV positive, through the newspaper. I wanted to help people realize that they do not have to hide, because if they kept silent about their HIV status, they could die just like my cousin.

Jacob has three children who were all born HIV-negative, thanks to the prevention of mother-to-child transmission of HIV intervention. They were all born after he had discovered he was HIV positive. His eldest child, a girl, is 3 years old, the middle boy is 18 months old and the youngest one is 6 months old. Their mother is also on ART. She started in 2009 when she was pregnant with their first child.”

Jacob says, “During my spare time I do motivational speaking in my community for free – I even privately help couples who’ve just been diagnosed to come to terms with their new reality. Sometimes only one of them tests positive and I help them deal with living together despite their different HIV statuses.”