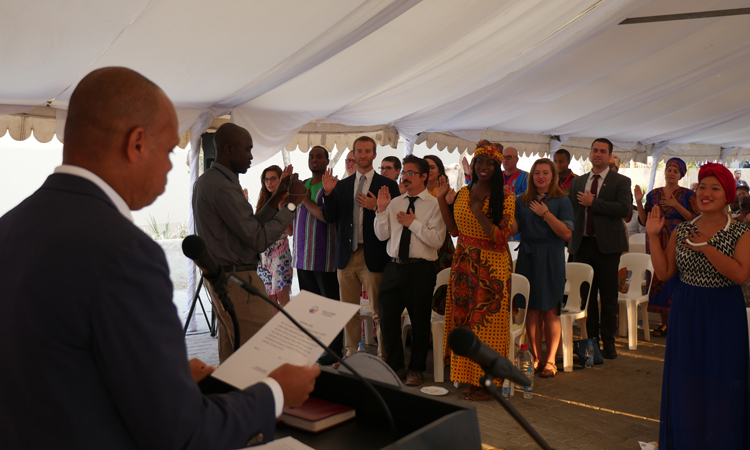 Pretoria, Monday, September 12, 2016 – Peace Corps South Africa hosted the swearing in ceremony of ‘SA 34’, the 34th contingent of trainees to serve in South Africa as Peace Corps Volunteers since 1997.

The group of 36 arrived in the country on July 8 and underwent intense pre-service training at Marapyane Agricultural Training College in Mpumalanga. Qualifying as Peace Corps Volunteers includes more than two months of training in language, culture, technical skills in teaching, and various health and well-being topics. More specifically, they were instructed in South African history and culture, and about the South African school system and curriculum. Several assessments were done during the training to ensure that the volunteers were adequately prepared for their two years of service. 15 Volunteers will serve as primary school teachers in a district in North-West Province, while the remaining 21 will serve in three districts of Kwa-Zulu Natal (KZN).

We interviewed, Joshua Merkens (25), a Peace Corps volunteer from Pennsylvania, who had recently finished serving two years in Kwa-Zulu Natal, and who was also leader of the ‘SA 34’ group. He explained that when he was trained in his first year of service he had really great volunteer leaders and consequently opted to extend his service and help the new contingent of volunteers. “I wanted to make sure that after I served my time, I would help the volunteers being sworn in today with everything they needed to become good Peace Corps Volunteers,” he said. Joshua added that the highlight of his service was setting up a primary school library in Ngwavuma village, deep in rural KZN, “I coordinated with my family back home and they were able to ship one thousand books, and I am proud of that because the school had a serious shortage of books, and we all know that the only way to improve one’s English is through reading.”

Jennie Rosan (52), from Boston Texas, another volunteer who was sworn in says her best highlight in South Africa so far has been the Msimanga Family in the North-West who have taught her about life. “Today I can speak a bit of Zulu, and I have learnt the diverse culture of the Zulu people, and I can proudly say that South Africans are really good people because they embraced me and taught me about life”. Jennie will be based in Kwazulu-Natal, as a teacher.

In her remarks, Peace Corps Country Director, Julie Burns said the group that is being sworn is a multi-cultured and multi-talented group, coming from nineteen States, “We are proud that today we present to you a group that has vast experience in teaching both children and adults, and have a wide range of academic backgrounds”. She also added that they come from nineteen different academic backgrounds, some in the arts and others in science and technology. “It is very difficult to adapt to a different culture altogether, let alone staying with a family that cannot even say a word in English, so we applaud these volunteers for a job- well done.”

Ambassador Patrick Gaspard, addressing the assembled volunteers and staff, said that he was honored to be part of the swearing in ceremony, particularly because he was at his last stretch as a representative of the American Government. “Today you will be swearing that you will be true ambassadors of the United States Government. You will be the ones interacting with South African people on the ground, and there is no other way for me to tell how proud I am of the group of Peace corps Volunteers today,” adding, “To just decide and take your stuff and leave your loved ones for a good two years and travel half the world to a place where you are not even known… means you are dedicated and serious about changing the lives of the people you will serve in that particular country.” Ambassador Gaspard thanked South African partners who ensured that the group of American volunteers would be well taken of.

Ambassador Gaspard concluded by reminding his audience that it was 55 years ago in September of 1961 that U.S. Congress passed the Peace Corps Act, after President Robert Kennedy had signed an executive order establishing the Corps, and which is why, today, the 34th group in South Africa has been sworn into service.