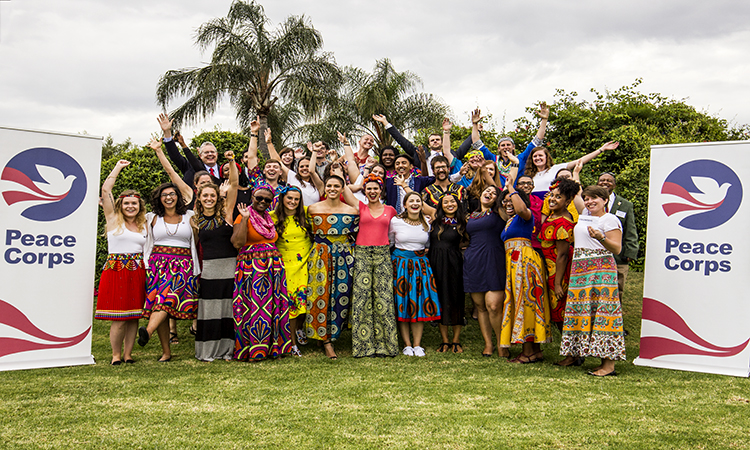 South Africa's 35th Group of Peace Corps volunteers who were recently sworn in.

In 1994, Presidents Mandela and Clinton agreed the United States and South Africa should work together for the transformation of South Africa. For the past 20 years, Americans have been coming to South Africa as Peace Corps Volunteers. Last week, 33 new Volunteers were sworn-in serve in the health sector, partnering with South African health professionals in the fight against HIV and AIDS. They are joining 130 other Volunteers already in country, who have lived and worked here to serve alongside South Africans in improving conditions for this great country and its people.

At a swearing-in ceremony in Pretoria, Acting Deputy Chief of Mission Elizabeth McKay had this message for the Volunteers: “Be the change that President John F. Kennedy wanted volunteers to be when he established the Peace Corps in 1961. Make the world a better place, and be the ‘Ripple of Hope’ his brother Robert F. Kennedy called for during his visit to South Africa in 1966.” Peace Corps Country Director Ronald Campbell said the relationship between South Africa and the United States has been growing by the day. “The fact that today we will be swearing in the 35th group here in South Africa means that the relationship that was established between the Clinton and Mandela administrations is growing to greater heights.” Campbell also added that participating in Peace Corps means American Volunteers are not only working in service to South Africa, but also participating daily in the exchange of cultures between our two countries.

The new Volunteers, who will be working in communities across KZN and Mpumulanga, have just completed an intensive 10-week pre-service training. One Volunteer, Nikki Parram from Tennessee, reflected, “My time here in South Africa has been wonderful. I volunteered with the Peace Corps because the mission’s values hold true to who I am.” She added that it was an opportunity for her to learn about South African culture as well as teach South Africans the culture and values of United States . “It is an absolute honor and privilege to be serving for Peace Corps here in South Africa.”