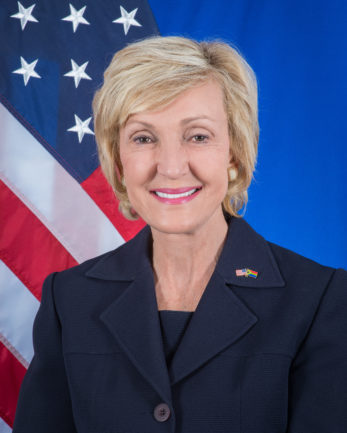 Ambassador to the Republic of South Africa

Ambassador Lana Marks was sworn in as U.S. Ambassador to the Republic of South Africa on October 4.  Prior to her appointment, Ambassador Marks served as the Chief Executive Officer of the LANA MARKS fashion brand, which she founded in 1987.  Over the course of 30 years, she developed the label into an international brand, opening stores and boutiques across the world.  Ambassador Marks is a member of the prestigious Council of Fashion Designers of America.  In 2001, she was one of 50 American CEOs – and the sole fashion representative – invited to the White House for the Women Business Leaders’ Forum.

A longtime advocate of women’s empowerment, Ambassador Marks has served on Harvard University’s Kennedy School of Government’s Women’s Leadership Board and as a distinguished speaker at Georgetown University’s Women’s Leadership Initiative.  She represented the United States twice for the Women Business Leadership Summit in Helsinki and is a supporting member of the Council of Women World Leaders.  In 2002, the Star Group selected her as one of 40 businesswomen to be honored as a leading woman entrepreneur of the world.  Ambassador Marks has joined forces with dozens of charities, with a focus on advancing breast cancer research and supporting underprivileged children and the arts.

Ambassador Marks was born in East London, South Africa, where she learned isiXhosa and Afrikaans and attended the University of the Witwatersrand.  A former competitive tennis player, she is married with two children and is the proud grandmother of three grandchildren.