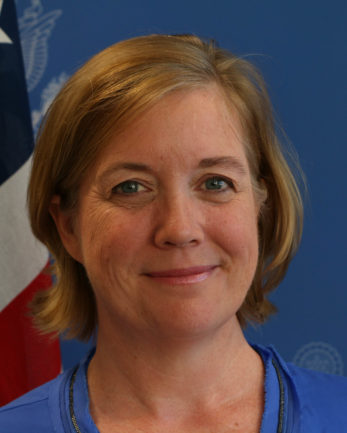 Virginia Blaser arrived in Cape Town in August 2017 as the Consul General. Prior to arriving, she served over a decade as a three-time Deputy Chief of Mission and Charge d’Affaires in in Mauritius, the Seychelles, Uganda and Tanzania.  Since joining the U.S. Foreign Service in 1989, CG Blaser has also served in Madrid, Brussels, London, San Salvador, and Washington, and in a range of political, management and consular positions. She graduated cum laude from Southern Methodist University in Dallas, Texas, with a triple major in history, anthropology and Latin American studies. CG Blaser is passionate about women’s issues, trade and investment, and developing young leaders. She speaks Spanish and French. CG Blaser is accompanied by her husband, Mitch, a technology consultant and open data expert, their four children, and their dog, Obi.