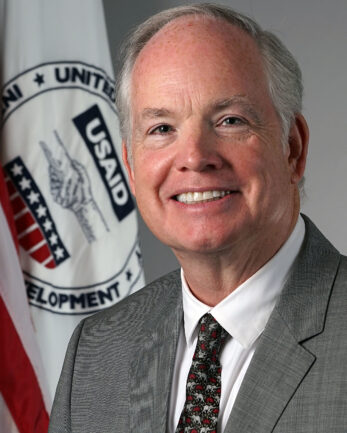 A member of the United States Senior Foreign Service with the Rank of Career Minister, Mr. Groarke is responsible for leading a staff of almost 1,000, including foreign service officers and other professionals from 22 U.S. government agencies, managing political, economic, health, law enforcement, military and other matters in South Africa.

As a senior United States diplomat, Mr. Groarke has been engaged with some of the most important historical events of the 21st century. A four-time Mission Director for the United States Agency for International Development, he has served in leadership positions in conflict environments in Afghanistan and Iraq, in foreign policy priority states, including Pakistan, Egypt and Morocco, countries facing humanitarian crises, including post-earthquake Haiti, and nations facing public health crises, including South Africa.

As USAID/Pakistan Mission Director from 2015 to 2017, Mr. Groarke led a $2.5 billion program promoting Pakistan’s development and the reconstruction of its conflict-affected border with Afghanistan. From 2013 to 2015, as Mission Director for USAID/Haiti, he led a $2.2 billion program supporting Haiti’s recovery from a devastating earthquake. As the Mission Director for USAID/Morocco between 2009 and 2013, Mr. Groarke led a program supporting the Government of Morocco’s political and economic reforms during a time of regional transition. In 2010, he was detailed to Afghanistan to lead USAID’s efforts to implement the U.S. Government’s new counter-insurgency strategy. Mr. Groarke previously served as Deputy Mission Director for USAID/Egypt (2006–2009) and USAID/Iraq (2005–2006) and as an overseas legal advisor for various countries in the Middle East, West Africa and South Asia 1996-2005).

A native of New York City, and a first-generation immigrant and college student, Mr. Groarke attended a New York City public high school and thereafter obtained a Bachelor’s degree from New York University, a Master’s degree from The London School of Economics and a Juris Doctorate from the University of Pennsylvania.