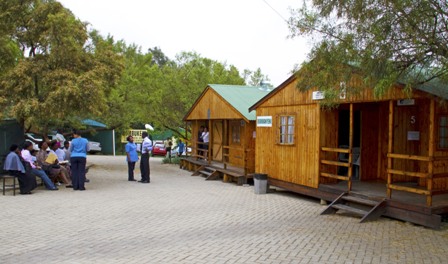 Five years ago, Ngwako Makgaba was down and, with a CD4 count of 105, almost literally out.

In 2000, he was diagnosed HIV positive. Six years later, he was unemployed, living in the informal squatting type community of Diepsloot, at his mother’s shack.  His brother had just died of AIDS.

“I didn’t know where my next meal was coming from and I didn’t want my mother to lose a second son,” he says.

Something had to be done about his plight.  He knew that the Witkoppen Health and Welfare Centre, north of Johannesburg, had an antiretroviral (ARV) treatment programme.

The Centre at Witkoppen has an HIV clinic funded by PEPFAR, supported by USAID with medical assistance administered by the Right to Care organization.

Ngwako presented himself at the clinic and was placed on treatment.  That was the start of his return from the abyss.

His problems had started in 2000, when he was a Maths and Science teacher at a school in a northern rural area called Bushbuckridge.  “I saw something was wrong.

The government was doing nothing about the problem.  People were dying and there was total ignorance of the HIV virus.

So I started a project to educate people about HIV and to try to get people to accept those who were HIV positive and to de-stigmatise the disease.

Part of the campaign was to get tested, and, leading by example, I did.  It was then I discovered that I was HIV positive.”

Instead of receiving support for his initiative from his fellow teachers and some of the parents and residents in the area, he was isolated.

“Suddenly I felt that there was no sharing and people avoided me.”  Things got worse until one evening, while on his way home, he got word that his cottage had been set alight.  By the time he arrived, the cottage was gutted and most of his possessions destroyed.

“I decided I could not stay any longer, and that was the end of my 11 years as a teacher.  That is when I went to Diepsloot to live with my mother.

I told my mother of my HIV status and she was very supportive.  But being unemployed and having the constant worry of where the next meal was coming from affected my health and I deteriorated rapidly.

“Over the years I had made a point of learning as much as I could about HIV.  While attending Witkoppen Health and Welfare Centre, I realised I could help other people living with the virus come to terms with their condition, so I asked whether I could become a volunteer counsellor.  They [management staff] agreed.

I progressed to become a paid counsellor and then, because of my numeracy skills I joined the data capturing unit.  I had always loved statistical work, so my transition to data capturing was not difficult.”

Today, he is the Data Capturing Manager at Witkoppen, but he has accepted a more demanding position with South Africa’s Department of Health and WITS Health in Middelburg in the Mpumalanga vicinity.

Starting November 1, 2011, he will be giving technical assistance and support to 14 clinics in the Middelburg and Waterval Boven areas.

“I do so with a heavy heart because Witkoppen Centre has been so good to me.  It’s no exaggeration when I say they gave me a new life.  But everyone is very dedicated at the centre and I know that the data capturing unit is in good hands.”

Best of all, this story has a fairy-tale ending.  On 17 December 2011, Ngwako will marry Charlotte, whom he met at Witkoppen.

“She’s HIV negative, but is totally supportive of my condition and is the love of my life.”