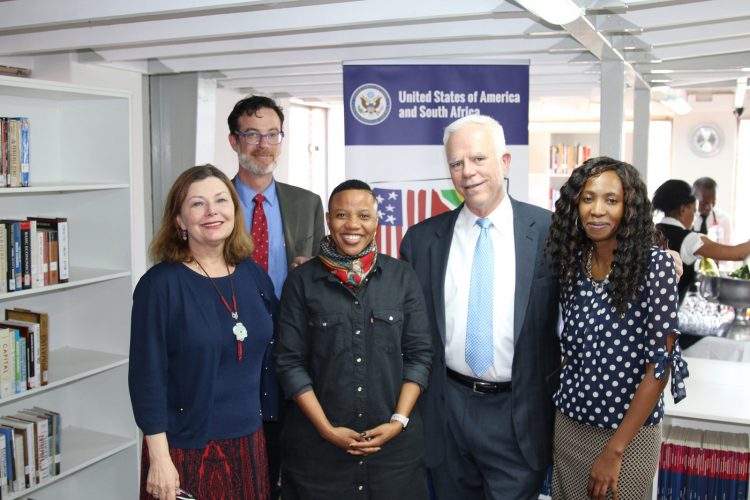 On April 20, U.S. Consul General Christopher Rowan, of the U.S. Consulate General in Johannesburg, hosted a reception to officially re-open the Consulate’s Rosa Parks Library & Innovation Studio in Soweto following a nearly four-month refurbishment project. At the reception, the Consul General reflected on the library’s more than 40 years of impact on Soweto’s community and reaffirmed the United States long-term commitment to providing enhanced educational opportunities to South Africans and free access to information through its American Spaces around South Africa, including the Rosa Parks Library & Innovation Center.

In welcoming the guests and talking about the U.S. Consulate’s mission at Rosa Parks Library & Innovation Studio, Consul General Rowan noted that “one of our core goals is for everyone who comes through our door and capitalizes on our resources, to be able to walk back out the door better prepared to make a positive difference in their communities.”

Commenting on the interaction among the guests afterward, the Consul General said: “There was a tremendous amount of expertise, passion and commitment to community gathered in the room. Everyone present at the reception was a change-maker – both individually and through the networks in which they work. In bringing these people together, I hope we are helping create new networks and new partnerships. We want to amplify the good work that they and we are doing in Soweto and across the city.”

Joining the Consul General in speaking to the crowd were Ms.  Khumalo and Ms. Priscilla Ntsime. Ms. Ntsime has been a patron of Rosa Parks Library since 1989 and she shared how the library contributed to her personal and career development. Newly appointed Executive Director of the South Africa-Washington International Program, Sibongile Khumalo also shared her experiences of joining a Young African Leadership Initiative Network course at Rosa Parks Library, being selected for the prestigious Mandela Washington Fellowship (MWF) in 2016, and later volunteering to run information sessions with aspiring MWF applicants at Rosa Parks.

The library has not only undergone an external transformation but is introducing new educational programs that will appeal to a wide audience. This year, in partnership with the Sci-Bono Discovery Center, the Rosa Parks Library is hosting a series of monthly four-day short courses to provide unemployed youth and emerging entrepreneurs with essential cutting-edge 21st century skills. The workshops will cover upskilling computer literacy, web and app development, robotics, 3D motion graphics, animation, and game development, as well as video production and editing. Another exciting, upcoming program will focus on 3D design and printing. Joining the library is also free of charge and all courses are free to library members.

The U.S. Consulate General began operating a library in Soweto in the early 1970s at the Orlando YMCA and officially opened its doors as an American Space in 1976. The library moved to its present location at the Ipelegeng Community Center in 1985, offering community members a variety of fiction and non-fiction books, programs such as the weekly youth club, Young African Leaders Network entrepreneurship and personal development courses, the monthly book club, as well as inspirational and informative speaker programs. Patrons also enjoy free, high-speed Wi-Fi at this modern space. In 2006, the library was renamed the Rosa Parks Library, and has become a place for young leaders and entrepreneurs to converge, network, and acquire new skills and knowledge.

Since its launch in January 2015, the Rosa Parks Library’s Innovation Studio has provided young South Africans with enhanced educational opportunities for acquiring computer-based skills that will make them more competitive in the job market and enhance their entrepreneurial pursuits. From presenting graphic design and photography short courses in its earlier days, the Innovation Studio has developed into a dynamic Maker space and hub for budding entrepreneurs.