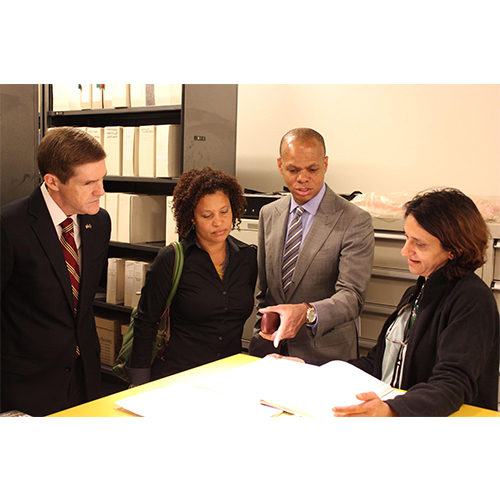 Many of those artifacts will benefit from a grant of over one million rand from the U.S. Government to de-acidify and preserve photographs and paper items, such as Madiba’s journals from his years at Robben Island.

U.S. Ambassador Gaspard addressed guests, “It is a tremendous honour to be able to join you this evening at the launch of an institution that is dedicated to growing the legacy of Mr Mandela. Madiba’s shining moral example is one that continues to be a prime example for the entire world, one that needs to be preserved. I have had the opportunity to interact with some of the material from Madiba’s personal archives, his letters and documents that record his life and his memories. For our youth, what matters is not just archiving the world, but changing it. The real goal here is the preservation of a set of values for young people, one that can be used to interrogate our present.”

After welcoming esteemed dignitaries and guests to the event, President Zuma spoke about the valuable work being done at the Centre of Memory.

“Housed at this Centre are some of the most important heritage resources that chronicle the life and times of our founding father – and icon – of our democratic nation, Tata Nelson Mandela. These resources are an integral part of our nation’s heritage, in particular our liberation heritage. They are our nation’s treasures and they indeed need to be preserved.

“We take this opportunity to thank the Centre of Memory for the excellent work they are doing in preserving part of our nation’s heritage.”

The event concluded with the ribbon-cutting ceremony, performed by President Zuma, Prof Nevhutanda and Prof Ndebele, accompanied by the Soweto Gospel Choir.