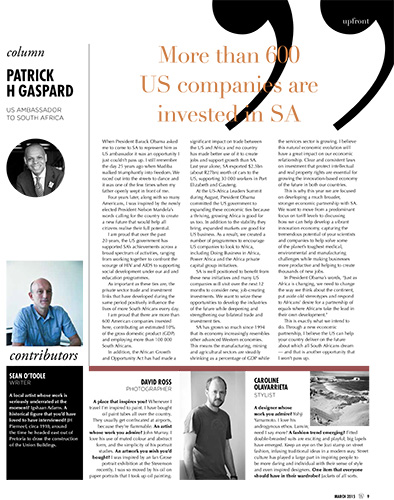 "The African Growth and Opportunity Act (AGOA) has had a significant impact on trade between the U.S. and Africa and no country has made better use of it to create jobs and support growth than South Africa.

When President Obama asked me to come to South Africa to represent him as U.S. Ambassador it was an opportunity I just couldn’t pass up. I still remember the day twenty-five years ago when Madiba walked triumphantly into freedom. We raced out into the streets to dance, and it was one of the few times when my father openly wept in front of me.

Four years later, along with so many Americans, I was inspired by the newly elected President Mandela’s words calling for the country to create a new future that would help all citizens of South Africa realize their full potential.

I am proud that over the last 20 years the United States government has supported South Africa’s achievements across a broad spectrum of activities, ranging from working together to confront the scourge of HIV and AIDS to supporting social development under our aid and education programs.

As important as these ties are, the private sector trade and investment links that have developed during the same period make an even bigger impact on the lives of South Africans every day.

I am proud that there are more than 600 American companies invested here contributing an estimated 10% of the GDP and employing more than 100,000 South Africans.

In addition, the African Growth and Opportunity Act (AGOA) has had a significant impact on trade between the U.S. and Africa and no country has made better use of it to create jobs and support growth than South Africa. In 2014 alone, South Africa exported over 23 Billion Rand ($2.3 billion) worth of cars to the U.S., supporting 30,000 workers in Port Elizabeth and Gauteng.

At the US–Africa Leaders Summit last August, President Obama committed the U.S. government to expanding these economic ties because a thriving, growing Africa is good for us too. In addition to the stability it brings, expanded markets are good for U.S. business. As a result, we created a number of programs to encourage U.S. companies to look to Africa, including Doing Business in Africa, Power Africa and the Africa Private Capital Group Initiatives.

South Africa is well positioned to benefit from these new initiatives and many U.S. companies will visit South Africa over the next twelve months to consider new, job-creating investments. We want to seize these opportunities to develop the industries of the future in South Africa while deepening and strengthening our bilateral trade and investment ties.

South Africa has grown so much since 1994 that its economy increasingly resembles other advanced western economies. This means the manufacturing, mining, and agricultural sectors are steadily shrinking as a percentage of GDP while the services sector is growing. I believe this natural economic evolution will have the greatest impact on our economic relationship going forward. Clear and consistent laws on investment that protect intellectual and real property rights are essential for growing the innovation-based economy of the future in both of our countries.

This is why this year we are focused on developing a much broader, stronger economic partnership with South Africa. We want to move from a predominant focus on tariff levels to discussing how we can help develop a vibrant innovation economy, capturing the tremendous potential of your scientists and companies to help solve some of the planet’s toughest medical, environmental and manufacturing challenges, while making businesses more productive and helping to create thousands of new jobs.

In President Obama’s words, “Just as Africa is changing, we need to change the way we think about the continent, put aside old stereotypes and respond to Africans’ desire for a partnership of equals where Africans take the lead in their own development.”

This is exactly what we intend to do. Through a new economic partnership, I believe the U.S. can help your country deliver on the future about which all South Africans dream—and that is another opportunity that I won’t pass up.