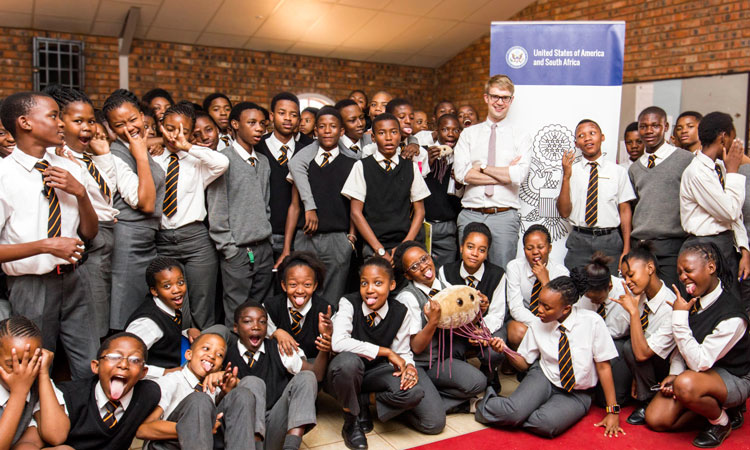 The United States Embassy in conjunction with Leap Science and Maths School in Ga-Rankuwa Zone 5 held a Science Lesson session, encouraging learners to be part of this amazing field of study

The United States Embassy in conjunction with Leap Science and Maths School in Ga-Rankuwa Zone 5 held a Science Lesson session, encouraging learners to be part of this amazing field of study, on 17 October. The U.S Mission is partnering with South African organisations to promote education and innovation – by bringing American experts to share best practices. The U.S Mission sends more than 200 South Africans to the US each year on a range of educational and cultural exchanges.

Science enthusiast Dr Tyler DeWitt has been in the country presenting Science, Engineering, Technology and Math (STEM) workshops to learners and teachers in Johannesburg, Bloemfontein, Pretoria and Cape Town. The session at Ga-Rankuwa sparked immediate enthusiasm from learners, stimulating an interest in the microscopic world. There are several ways to educate learners. As for DeWitt, he makes science relevant and understandable through story telling, making it fun and interesting at the same time. Learners were lively and eager to learn more about a number of the hottest scientific topics that DeWitt touched on. They include; Microbes (from the ones that cause diseases and environmental damage to those that help with our digestive systems) and Bacterial DNA, how Bacteria transfers pieces of DNA to their neighbours to shield themselves from antibiotics that a person takes when their sick.

DeWitt said he has always loved to explain things to people in a fun way. “When I was about 10 years-old, I would teach things to my little sister. I’d make things interesting for her,” said DeWitt. He used to be a High School teacher and claims that he was like all those boring, regular teachers. “I was dry. And I focused only on facts. It was ‘information’ I was excited about but my students were not. I realized that if I wanted them to care, if I wanted them to get excited, I’d have to find ways to make them understand while they are laughing,” said the Microbiologist. Unfortunately, many Scientists don’t take him serious because of what he does. They say: “Oh!!, he just tells stories to kids. He just makes people laugh he’s not a serious Scientist.” So, that’s something that I get a lot. And it means I won’t be able to teach science at a big university because people would think I’m not serious enough. “This is a sacrifice, I’m happy to make. I believe what I’m doing is important,” said DeWitt. He thinks education is the most important thing in the world. “It’s one ticket out of disadvantaged situations. I’d like to see individuals in the townships have as much access to education. They must be able to do whatever they want to do,” he added.

He is a Youtube sensation. His ‘Science with Tyler DeWitt’ has become one of the top educational channels. And his TED Talk on making science fun has been viewed over one million times. A grade 8 pupil Omphile Msimanga said she learned a lot. “I hope all learners grasped the information which they were exposed to,” said the aspiring Doctor. Educator at Leap Wilhemia Motileng said this was an opportunity to get their learners excited about science. “We wanted them to see that there are interesting ways to learn,” said Motileng.

Originally published in the Ga-Rankuwa Voice