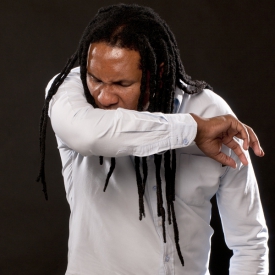 Long fight with TB: The Story of Thabo Pelesane

“I’m  thankful to the South African Health System to be alive because TB can be prevented and cured yet it can be fatal if left unattended” –  these are the words of a TB survivor and ambassador, Thabo Pelesane.

Pelesane, who was born in the township of Jouberton in Klerksdrop, North West, suffered with TB for 22 long years. He remembers having to adhere to a series of 40 day injection treatment and regular visits to the clinic. His own father succumbed to the same illness in 2005, while his mother managed to win the battle over the disease, and survived.

This father of two was first diagnosed in 1989 at the age of 13, but was determined to stay positive in his mind-set. His first visit to the hospital was soon after he started experiencing symptoms such as violent coughing and night sweats; tests that were conducted on Pelesane confirmed he had TB.

Pelesane remembers the turning point that came when he was walking home from work and could taste blood in his mouth, he was rushed to the nearby clinic – Wilmedpark in Klerksdorp, where they admitted him for several days. The next day he went through tests that revealed he had developed cavities within his lungs as a result of his condition, this had resulted in scarring, which meant that he had to begin treatment again.

He stayed on treatment until the day he was due for an operation – a day Pelesane will forever cherish. After so many years of struggling with the disease, doctors took him through a series of tests and revealed that he was finally free from TB, and the scheduled operation was cancelled.

Pelesane ‘s story  is one of hope, today he has a testimony to make. In fact, he has since made it his responsibility to spread the word on how people should deal with TB from diagnosis till it gets treated.  For the past two years, he has been making public appearances in a bid to encourage people to live healthy lifestyles and routinely visit health professionals to determine if their health is sound. He is also an ambassador for the We Beat TB campaign, which is being implemented by the University Research Council and funded by the United States International Agency for Development.

“I’m often invited by the Motlosana Municipality’s health desk to create awareness among residents during public gatherings. The message that I always spread is that don’t give up, TB can be cured. I lived with it for about two decades”

He is grateful to his mother, friends and colleagues who supported him throughout his dark days. He encourages people to take care of their own health by constantly using the public facilities to check on their status of health.

” I take my two daughters for tests  and would encourage other parents do take responsibility of their own health and that of their children.”

Although Pelesane was often sick he continued serving the community of Motlasana library, working as a librarian alongside friends and colleagues who supported him during his ordeal with TB. And today( as a tribute to the child he was when we first had TB), is part of a national campaign to end TB in children, which is often undiagnosed and under reported.