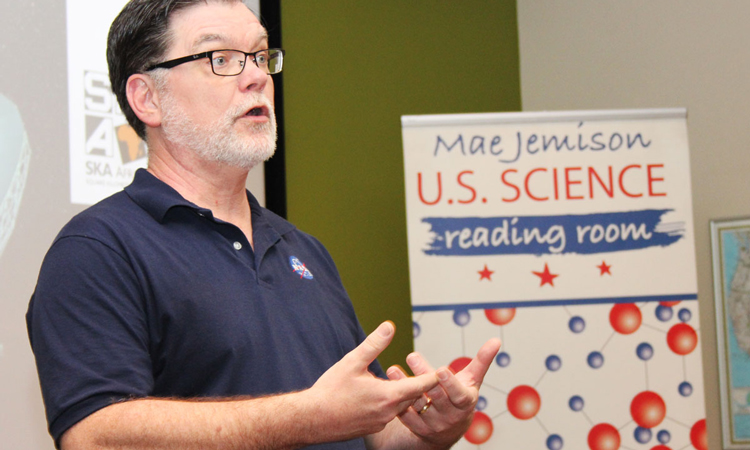 The U.S. Mission to South Africa hosted former senior NASA executive Jim Adams March 8-14, 2017, for a series of speeches and educational outreach programs around the country.   Recently retired from NASA, Mr. Adams has more than 35 years of aerospace engineering experience.  His visit was one of several academic exchange and professional development programs hosted by the U.S. Embassy throughout the year.  These programs, sponsored by the U.S. Department of State, promote dialogue and encourage mutual understanding between Americans and South Africans.

Speaking with rapt audiences across South Africa, young and old alike enjoyed standing-room-only lectures during which Mr. Adams took questions about the existence of alien life forms and discussed the possibility of humans visiting Mars by 2035.  This was Mr. Adams’ eighth visit to South Africa, which he commended for the Square Kilometer Array (SKA) project, noting it could act as a catalyst for science, technology and engineering business opportunities, jobs, and innovation.  “SKA has the potential to put Africa on the map as a world big data and analytics hub,” he said.  Mr. Adams took an inclusive approach to space science, commenting, “The competitive era of the ‘space race’ is over.  My belief is that as we continue this age of innovation, that having people, not only Americans or Europeans but also Africans, especially South Africans educated in science, math and technology is extremely important.  Otherwise, our advancements will begin to taper off.”

Mr. Adams addressed hundreds of students and aspiring scientists in the Eastern Cape March 8-12, including a sold-out lecture at Scifest in Grahamstown.  He inspired learners with stories of the moon, Mars, and Pluto at Paterson and Walmer High Schools in Port Elizabeth, Uitenhage’s Science and Technology Centre, and Grahamstown’s Joza East township, as well as engineering students at NMMU, with a presentation about the development of robotics in space.  He also participated in Scifest panel discussions in collaboration with SKA.  It was Mr. Adams’ fourth visit to Scifest, and his popularity was recognized by Minister Naledi Pandor at Scifest’s opening ceremony.

Mr. Adams spent March 13 in Pretoria with more than 1,000 students at Pretoria Technical High School and the U.S. Embassy’s Mae Jemison Science Reading Room in Mamelodi.  He finished the day at the National Research Foundation, which hosted him for a lecture entitled Journeys into Space Science: Opportunities for Innovation.  He reminded audiences of a quote from Nelson Mandela that also applies to space exploration:  “It always seems impossible until it’s done.”

In Johannesburg on March 14, Mr. Adams met students at Leap School 4 in Diepsloot for a presentation and question and answer session entitled Space Exploration: Past Present and Future.  That evening, he joined Dr. Adriana Marais and Professor David Block at the Sci-Bono Discovery Center as part of the Center’s “Speak 2a Scientist” series.  Mr. Adams gave a presentation entitled Mars: How are we really going to get there?

Jim Adams retired from NASA in 2016, where he last served as Senior Executive in the Office of the Chief Technologist as the Agency Deputy Chief Technologist.  Mr. Adams has extensive background in design, development and operations of both large and small-scale spacecraft missions as well as ground systems and infrastructure.  His skills range across program/project management, acquisition, planning, implementation and execution.  He has worked on over two-dozen successful currently operating space missions, received three NASA medals recognizing exceptional service and leadership including NASA’s Outstanding Leadership Medal.  Mr. Adams holds a B.S. in Physics from Westminster College in New Wilmington, PA and a M.S. in Electrical Engineering from Villanova University in Villanova, PA.

IMG 3865: Jim Adams takes a question from a pupil at Pretoria Technical School.

IMG 3901: “Selfie” moments were the order of the day.  Jim Adams taking a selfie with pupils at Pretoria Technical High School before his presentation.