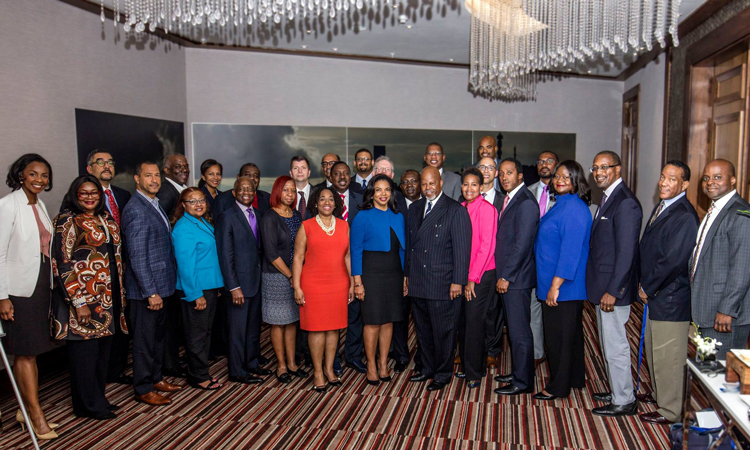 Through a partnership with USAID - US Agency for International Development USAID Southern Africa, the U.S. National Association of Securities Professionals NASP HQ (www.mida-infra.org) is visiting South Africa for a first of its kind “U.S. and Africa Institutional Investor Conference."

It is not every day that you get international dealmakers of this size together under one roof, but earlier today in Sandton, some of South Africa’s top business leaders, including Chief Executive of Standard Bank – South Africa Sim Tshabalala and Chief Executive Officer of the Johannesburg Stock Exchange (JSE) Nicky Newton-King, came together to tell American investors exactly why South Africa is an ideal investment proposition.

Through a partnership with USAID – U.S. Agency for International Development USAID Southern Africa, the U.S. National Association of Securities Professionals NASP HQ (www.mida-infra.org) is visiting South Africa for a first of its kind “U.S. and Africa Institutional Investor Conference.” They are facilitating relationships that will ideally result in American investments in South Africa and the continent, particularly in infrastructure development.

Speaking at the conference, Acting USAID Country Director Alonzo Wind said, “This program operates at the nexus of business and development…we hope our American visitors will develop valuable and meaningful partnerships here in southern Africa, where some of the fastest-growing economies in the world exist.”

NASP, a U.S.-based membership organization supporting women and minorities working in the securities and investment industry, boasts 700 members and represents more than 140 companies. The total assets under management of pension plans managed by NASP members is close to $3 trillion – that’s approximately 40% of all pension plans in the United States!

Donna Sims Wilson, the Chair-Elect of NASP, raved about the warm reception the NASP delegation received in South Africa. She added, “I leave feeling inspired that we’ll get something done following this trip. Many in our group expressed a willingness to go back to the United States to do the work necessary to invest in South Africa and the continent.”

This program is one of many win-win initiatives supported by the U.S. Mission in South Africa to promote the mutually beneficial outcomes of trade and investment between our two countries. As Sim Tshabalala said, it will “give rise to inclusive growth and prosperity” in South Africa, something we support wholeheartedly. And by making the long trip from the United States to South Africa, NASP is creating new opportunities, especially for American women and minorities, to benefit from the vast potential found in a commercial and development relationship here.