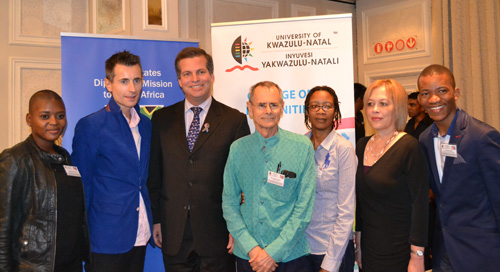 The University of KwaZulu-Natal (UKZN) has launched a curriculum development project supported by a grant from the U.S. government

On May 30, 2014 the University of KwaZulu-Natal (UKZN) launched a curriculum development project supported by a grant from the U.S. government. The U.S. Consulate in KZN has had the privilege of being a long time partner of UKZN and other universities in KZN, focusing on continuously improving education in multiple fields including but not limited to the sciences, engineering, and the arts. The project launch attracted participants from academia, the Department of Education, non-governmental organizations, and the media and included a panel discussion on the project and state of affairs in South Africa as well as an open questions and answers session.

It was fitting that the project was launched at the end of May heading into June in recognition of the International Day Against Homophobia and Transphobia, — IDAHO – which was on May 17 and LGBT Pride Month which is celebrated in June. IDAHO marks the day in 1990 when the World Health Organization stated publically that homosexuality is not a disease. The month of June was originally celebrated as LGBT Pride Month to commemorate the June 1969 Stonewall riots in New York City which sparked the modern LGBT civil rights movement in the United States. Today, it is observed around the world. In 2013, over 40 years after Stonewall, the United States Supreme Court overturned Section 3 of DOMA, the Defense of Marriage Act, which prevented federal recognition of same-sex marriages. That decision has paved the way for policies and programs in the United States that support all married couples, regardless of their sexual orientation.

In September 2013 U.S. Secretary of State John Kerry participated in the first ever United Nation’s LGBT Ministerial event where he reaffirmed the United States’ commitment to promoting and protecting the human rights of all people, regardless of sexual orientation or gender identity. Secretary Kerry said, “I join with my colleagues at our embassies, consulates and USAID missions around the world in saying no matter where you are and no matter who you love, we stand with you.”

South Africa is a shining example that led the global community and legally prohibited discrimination on the basis of sexual orientation in its 1996 constitution. The South African legal system is one of the most progressive in the world when it comes to legally protecting the rights of LGBTI and all individuals. South Africa was the sixth country to legalize same sex marriage with a Constitutional Court ruling in 2006. It was also one of the first countries to allow adoption by same sex couples, in vitro conception by same sex couples and to legally recognize sex changes.

President Obama has made the fight for equal rights of LGBTI persons a top priority of his administration. While both of our countries have made strides in legal protections, there is much work to be done to apply the law to people’s daily lives. Too frequently we hear of children and adults abused and harassed and sometimes worse, because of their sexual orientation. The existence of “corrective rape” to so-called correct lesbian gender identity is anathema to our hard won freedoms and against our values of human rights for all.

There is now growing consensus around the world that mainstreaming gender identity education in schools is a key part of the struggle for equal rights. Schools are critical to changing public opinion about human rights and values. Much of this work was done by advocates in the education system. In 2011 California became the first state in the United States to mandate that primary and secondary school curricula teach children about “the role and contributions of” homosexual American historical figures. California law also forbids materials that “contain any matter reflecting adversely” upon gays on the basis of sexual identification. In 2013 the National Education Association, the largest U.S. teachers union, endorsed the inclusion of LGBT history and thematic lessons in school curricula.

This newly launched UKZN education module is a step along the path towards equality for all students and for the broader society. This training module intends to introduce more South Africans to the protections afforded for sexual orientation and for all citizens under the South African constitution. It represents an important contribution to academic studies on the topic and it demonstrates what can be accomplished when the United States and South Africa work together on a common cause. As South Africa’s former President and global icon Nelson Mandela once said, “Education is the most powerful weapon which you can use to change the world.”