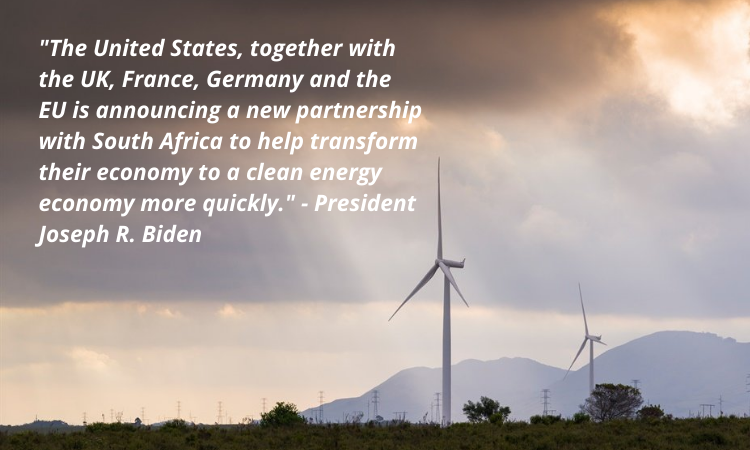 The governments of South Africa, France, Germany, the United Kingdom and the United States of America, along with the European Union, have today announced a new ambitious, long-term Just Energy Transition Partnership to support South Africa’s decarbonisation efforts.

The Partnership aims to accelerate the decarbonisation of South Africa’s economy, with a focus on the electricity system, to help it achieve the ambitious goals set out in its updated Nationally Determined Contribution emissions goals.

It will mobilise an initial commitment of $8.5 billion for the first phase of financing, through various mechanisms including grants, concessional loans and investments and risk sharing instruments, including to mobilise the private sector.

The Partnership is expected to prevent up to 1-1.5 gigatonnes of emissions over the next 20 years and support South Africa to move away from coal and to accelerate its transition to a low emission, climate resilient economy.

The Republic of South Africa’s Head of State, President Cyril Ramaphosa, expressed his support for the declaration:

South Africa welcomes the commitment made in the Political Declaration to supporting the implementation of our revised Nationally Determined Contribution, which represents our country’s ambitious effort to support the global battle against climate change.

We look forward to a long term partnership that can serve as an appropriate model of support for climate action from developed to developing countries, recognising the importance of a just transition to a low carbon, climate resilient society that promotes employment and livelihoods.

This game-changing partnership will set a precedent for how countries can work together to accelerate the transition to clean, green energy and technology.

Moving away from coal is essential if we are to meet our target of limiting global warming to 1.5 degrees. President Ramaphosa has shown real leadership on this issue, and the United Kingdom is committed to working with South Africa and our partners to support a just and fair transition to renewable energy.

The President of the United States of America, Joseph R. Biden added:

The United States, together with the UK, France, Germany and the EU is announcing a new partnership with South Africa to help transform their economy to a clean energy economy more quickly. Right now South Africa is the largest emitter in Africa due in large part to the heavy reliance on coal for power.

By closing South African coal plants ahead of schedule and investing in clean power alternatives for the people of South Africa and supporting an equitable and inclusive transition in South Africa’s coal sector, we are following through on the pledge the G7 partners made in Cornwall to accelerate the transition away from coal in developing countries.

The President of the Republic of France, Emmanuel Macron said:

It will benefit from the long-standing cooperation between France and South Africa through the work of the Agence française de développement. And we hope it will set the standard for other such partnerships in the future. France stands ready.

The Chancellor of the Federal Republic of Germany, Angela Merkel, said:

I am very pleased that Germany is part of this important partnership with South Africa and we can share our experience with a just transition. We are committed to supporting both the decarbonisation of South Africa‘s electricity production and the development of new economic opportunities for affected communities.

This partnership is a global first and could become a template on how to support just transition around the world. By joining forces, we can speed up the phasing out of coal in partner countries, while supporting vulnerable communities that depend on it. Ensuring a just transition is a priority for the EU, both at home and abroad.

Delivering on this ambition will affect mining communities and workers. The Partnership recognises the importance of supporting South Africa’s efforts to lead a ‘Just Transition’ that supports affected workers and vulnerable communities, especially coal miners, women and youth, as the South African economy changes.

It will work to identify financing options for innovative technical developments and investments, including electric vehicles and green hydrogen, to help the creation of quality, green jobs.

Today’s announcement represents a powerful example of action through a global collaboration between an emerging economy and international partners to limit global warming to 1.5 degrees. It is open to other countries wishing to contribute financial capacity, thereby exerting a further boost to South Africa’s clean energy transition.

The Political Declaration issued today marks the beginning of a process. The Partnership’s operational arrangements will be elaborated in detail over the coming months.

Political Declaration on the Just Energy Transition in South Africa

Remarks by President Biden in Meeting on the Build Back Better World Initiative | Nov 2, 2021 | The White House