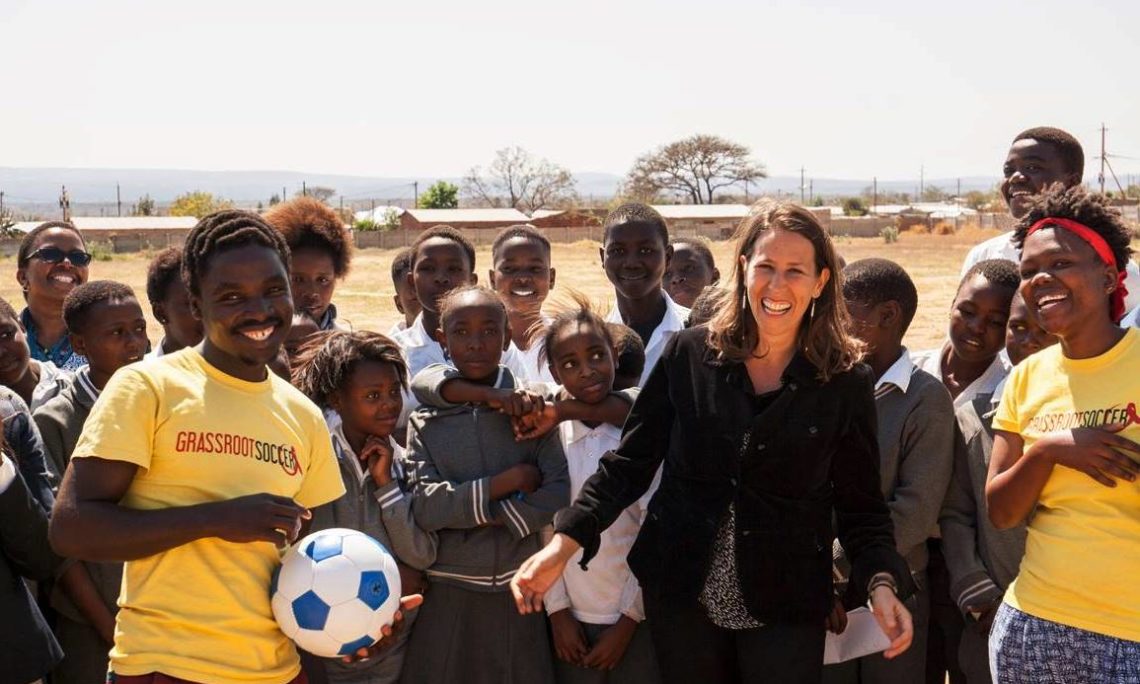 U.S. Mission to South Africa Chargé d’Affaires Jessye Lapenn with participants of the Grassroot Soccer program, which runs programs for adolescent girls and boys, in partnership with the Waterberg Welfare Society and with support from USAID and the U.S. President's Emergency Plan for AIDS Relief (PE

It was with great excitement and a bit of national pride that I read the South African Institute of Race Relations’ (SAIRR) March 13 report, “SA has made significant progress against HIV/Aids, but more must be done”, which captured South Africa’s success in driving down the rate of HIV infections. The numbers are truly inspiring – there have been 39% fewer new HIV infections between 2009 and 2016. This includes an astounding 50% drop in infections in KwaZulu-Natal and a 57.6% drop in the Northern Cape. Congratulations, South Africa!

As the report shows, you have made incredible progress over the past few years. Through the US President’s Emergency Plan for Aids Relief (Pepfar), we have partnered with you since 2004, standing shoulder-to-shoulder with South African citizens, civil society leaders, health practitioners and government leaders in the HIV response. The US’s investment in the fight against HIV/Aids has helped to provide life-saving treatment for more than four million South Africans and more than 13 million people worldwide.

Together we can save and improve more lives.

While we celebrate this achievement with you, we also acknowledge the second part of the report’s title: “but more must be done”. In order to eradicate HIV/Aids in South Africa, we need to control the epidemic. We, the South African and American people, know what we need to do – quite simply, we need everyone to get tested and to know their status. We need those who are HIV positive to start and stay on treatment, and those who are HIV negative to remain so. To do this, we need everyone’s help. All of us can be HIV advocates.

The US applauds President Ramaphosa’s call to action in his State of the Nation address, to provide HIV treatment to two million more South Africans by 2020. Never has this been more achievable, as we are at a unique moment in the course of the epidemic. We now have the tools to control the HIV epidemic, even without yet having an HIV vaccine or cure. This is why today the US is more committed than ever to working with South Africa to achieve epidemic control.

As we talk about the HIV epidemic, it’s important we all understand the basic science that guides HIV response.

Incidence is the number of new infections. To get control of the epidemic, the rate of new infections needs to decrease. Incidence is the “fuel” for the epidemic – and with effective prevention strategies like voluntary medical male circumcision (VMMC), pre-exposure prophylaxis (PrEP), social and structural interventions, school-based interventions, and youth programmes like DREAMS (Determined, Resilient, Empowered, Aids-free, Mentored, and Safe), we are in full support of the government’s goal to reduce new infections from 270 000 a year to 88 000 a year by 2020.

We’ve also learnt that when people living with HIV (PLHIV) are successfully on treatment and their viral load, or amount of the virus circulating in their body, is low, it decreases the chances of transmission by more than 90%. This is called “treatment as prevention”.

There are many exciting new tools available to us for treatment and prevention, including new drugs and diagnostics. HIV vaccines may be on the horizon; we’re partnering with South Africans to conduct research and testing for those.

We are constantly innovating to generate greater efficiencies, drive down costs, and increase our impact. These efforts have made Pepfar a model for development programmes everywhere, with the ability to deliver clear, measurable, and transformative results – and it is this focus and drive that we bring to our efforts in South Africa. Together, we can control the HIV/Aids epidemic and help people live longer, healthier, happier, and more productive lives.

Join us in intensifying our efforts, because in order to control and ultimately end the epidemic, we must sustain and expand our collective gains. Our lives, and our children’s lives, depend on it. Jessica Lapenn is the Chargé d’Affaires at the United States embassy in Pretoria.