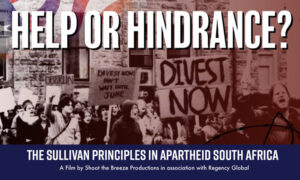 This week we are excited for the launch of “Help or Hindrance? The Sullivan Principles in Apartheid South Africa”.  Free to the public, this  documentary by award winning film production company Shoot The Breeze Productions, sponsored by the U.S. Mission to South Africa, tells the story behind The Sullivan principles. These Principles launched an unprecedented movement that inspired  145 U.S. companies to commit to eradicating discrimination in their South African operations and working towards dismantling apartheid between 1977 and 1994.

Signing on to the Sullivan Principles was a bold step for  American businesses based in South Africa and a massive mindset shift for white managers tasked with implementing equality in the workplace and social upliftment in communities. The document profiles the achievements and challenges with the Principles, including being at odds with the African National Congress (ANC) in exile’s call for sanctions, the divestment movement in the United States, and liberation movement in South Africa.

Candid interviews with Signatory Association executives, political analysts and legendary activists Murphy Morobe, Moses Mayekiso, Allan Boesak and Prexy Nesbitt brings to life the complexities of this untold story on both sides of the Atlantic.

Views are limited to 800. So register and book your ticket now!

There will be a live Q & A with co-director and producer Sharon Farr at 7pm (SAST) on August 27th, following the premiere, hosted by historian Dr. Ciraj Rassool that will also be available online until August 30th. Dr Rassool is the Director of the African Programme in Museum and Heritage Studies at UWC.

Participate in the Q & A via the Encounters Facebook page https://www.facebook.com/EncountersDocFest.