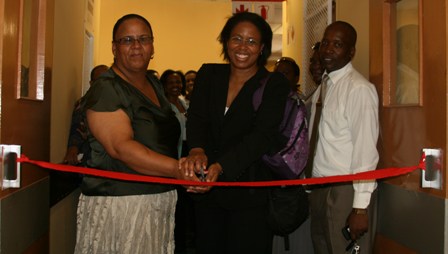 The strong relationship between the U.S. Centers for Disease Control and Prevention (CDC), ICAP and the Eastern Cape Department of Health first started in 2003 first with CDC providing support through Clinton’s LIFE Initiative, which was quickly followed with PEPFAR funding in 2004.

“We started this HIV program together. There were so many fires to put out and lots of gaps”, said Ms. Nomalanga Makwedini, Deputy Director General, Eastern Cape Department of Health. “ICAP came in at the right time, when we started providing antiretrovirals in 2003.

As a province we did not have the knowledge.  We were fortunate that CDC funded you, and you could help,” she continued.

With the launch of PEPFAR, there was a rush to provide care and treatment to underserved populations, and “track 1” programs that employed established international organizations were used to assist with the scale up. ICAP was one of four “track 1” partners recruited to jump-start programs in South Africa.

Today all these programs are transitioning their services to local government – and all, like ICAP, have left solid foundations on which the South African facilities can build and grow. As Dr.

Pamela Marks from CDC commented “It is only with the monumental contribution of partners like ICAP that South Africa has reached this point in the HIV epidemic.”

ICAP’s program was a phenomenal success at providing life-saving care and treatment to thousands of adults and children living with HIV, primarily because the organization always walked step in step with the South African government.

Together, ICAP and the province identified problems and implemented solutions.
“It has been a wonderful and fruitful partnership working with the Eastern Cape. Our roots in South Africa are right here and we feel very privileged to have worked here,” said Dr. Wafaa El-Sadr, ICAP global director.

ICAP cemented their legacy in the Eastern Cape by officially handing over five newly renovated clinics to the government.

The facilities are in Mdantsane, reputed to be the second largest township in South Africa after Soweto.

These programs will be handed over to two local district support partners, Health Systems Trust and Aurum Research Foundation.

And as one chapter closes, another opens.  ICAP is not about to leave South Africa; the ties are too strong.

With CDC funding, ICAP will continue doing what it does best by helping to strengthen facilities in the OR Tambo district in the Eastern Cape.

ICAP has also been funded to lead several evaluations in South Africa including pediatric HIV treatment and one on populations at higher risk of HIV infection.
They will also conduct multi-country study on medical male circumcision in several southern African countries.

Finally, in collaboration with the University of Cape Town, ICAP will investigate and develop TB/HIV training courses for clinicians and infection control diplomas for clinic staff.

Ms Sindisa Gede, Acting District Manager for Amatole, concluded the day’s commemorations, saying “The footprints of ICAP will never fade from our hearts.

ICAP has done their part in ensuring that things are happening and systems are in place.  Now it is for us to ensure that we keep your standards and carry it forward.  Shine, ICAP, shine!”