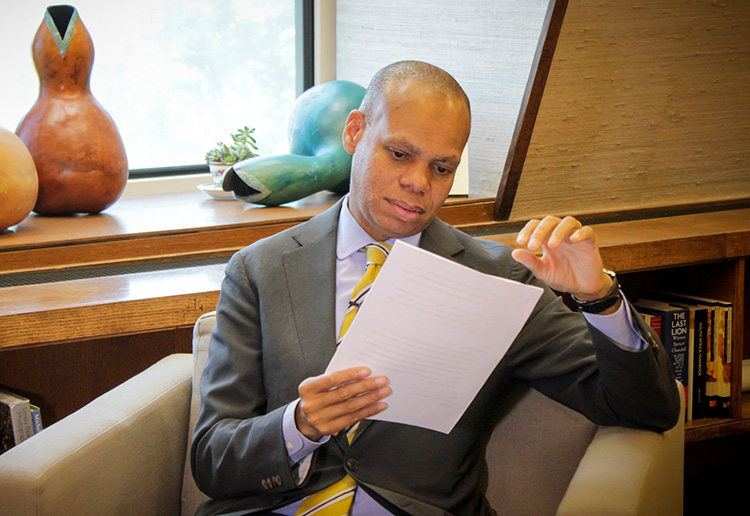 If you’re like most of us, you probably don’t spend a lot of time thinking about what open governance means to you – how it impacts your daily life, your family, or your community. But every one of us has a role to play in making our governments better.

Imagine for a moment what your life would be like if you didn’t have freedom to express your thoughts openly, if all government information was a state secret and you had no idea how your tax dollars were spent, or if you didn’t have a legal system in place where you could report corruption when you saw it? It takes all of us holding our governments accountable to make them better.

Five years ago, my President, Barack Obama, pledged to be more transparent at every level — because more information on government activity should be open, timely, and freely available to people. He pledged to implement the highest standards of integrity — because those in power must serve the people, not themselves. And he pledged to increase access to technology — because in this digital century, access to information is crucial to good governance.

It is this commitment at the highest levels in our government that motivates me to advocate for open governance through my work as the U.S. Ambassador to South Africa. And it is particularly exciting to do so here in South Africa, where citizens and government take it as seriously as we do. South Africa has demonstrated its commitment and leadership by hosting an important conference this week when more than 500 civil society organizations and government representatives, from across the continent, come to Cape Town for the 2016 Open Government Partnership African Regional Conference.

The Open Government Partnership (OGP) has a simple, yet ambitious goal — to make governments better. All of us want more transparent, effective, and accountable government with institutions that empower us and are responsive to our aspirations. Through OGP, reform-minded civic and government leaders commit to the principles enshrined in the OGP Declaration: promote transparency and accountability, empower citizens, fight corruption, and harness new technologies to strengthen governance. This year’s conference offers an opportunity for democratic African countries to share ideas, best practices and the way-forward with their colleagues. I congratulate the South African government, and particularly Deputy Minister of Public Service and Administration Ayanda Dlodlo, for the leadership she has shown as chairperson of the OGP.

Under South Africa’s chairmanship of the OGP, I am encouraged that more countries, particularly from Africa, will join the OGP initiative. I am attending the conference along with a team from Washington of U.S. government officials who support South Africa and other African member countries. Together, we will jointly work to improve transparency and governance in the United States, South Africa and around the world. Make no mistake, there are tremendous challenges in ensuring government is accountable to its citizens, but through the OGP we will address these challenges together.

Despite our best efforts, the U.S. struggles to meet some of our own open governance ambitions. We constantly weigh the importance of privacy with the importance of open governance, particularly with regard to classification of government information, access to information requests and whistleblower protection. Even where we succeeded, our success has not always been complete. For example, President Obama createdwww.data.gov in 2009 to make local, state and national government data available to researchers. Although a number of private companies in real estate, mapping, agriculture and other sectors were able to improve their customer products using the data, many researchers complained the data collected by different entities was not standardized, well-organized, and not user-friendly. We have undertaken measures to improve the quality of the data, and hope the measures will bear fruit. We must redouble our efforts to ensure we provide relevant and useful data in a timely manner.

OGP is not simply a partnership between governments; it is a partnership between governments and their citizens. As South Africans, you have a lot to be proud of, including your government’s proud history of engaging civil society. However, even here, there have been occasions when civil society was criticized when it used open governance legislation, like the Promotion of Access to Information Act (PAIA), to obtain embarrassing information that sheds light on government corruption or maladministration. There is also a tendency to accuse civil society of being unpatriotic when it criticizes government policy or uses the litigation to hold government accountable to democratically enacted laws. It is important to resist these tendencies when the situation arises. Often, criticism and even litigation are the highest forms of patriotism.

No person, community, organization, or government has all the answers. Nor do they have perfect practices. All of us as citizens of countries that value open governance have a responsibility to find new ways to learn from each other, to share best practices, and most importantly, to turn the commitments that we have made into real and meaningful action that improves the daily lives of our families, friends, neighbors, and communities. If we do, we can ensure governments exist to serve the people, and not the other way around. DM