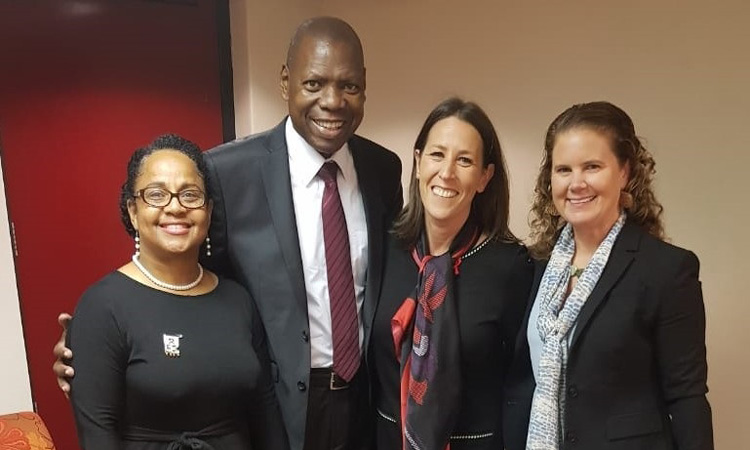 Pretoria: The Ministry of Health welcomes ($732 million) R10 billion funding approval by the U.S. President’s Emergency Plan For AIDS Relief (PEPFAR) towards South Africa`s HIV programme. This much-anticipated funding announcement was made by the Office of the U.S. Global AIDS Coordinator following the detailed proposals for South Africa’s Country Operational Plan (commonly known as COP19) for a period between October 2019 and September 2020 to increase the number of people living with HIV on treatment and ensure that patients remain on treatment.

The Minister of Health Dr Zweli Mkhize and the United States Chargé d’Affaires Jessica Lapenn met today on the side-lines of the 9th South Africa AIDS Conference in Durban to discuss their shared goal of HIV epidemic control in South Africa.  They agreed on ways to accelerate HIV response efforts, and reiterated their commitment to work closely together.

Minister Mkhize said the PEPFAR funding will contribute towards the country`s ambitious targets of initiating additional 2 million individuals on HIV treatment by December 2020 in line with President Cyril Ramaphosa announcement during the State of the Nation Address in February 2018 and also provide HIV-TB screening and testing services to 28 million by December 2020.

Recognising the importance of South Africa to the global HIV response, the $732 million (R10 billion) COP19 investment in South Africa represents 20% of PEPFAR’s worldwide budget across 56 countries. The COP19 funding is in addition to the current COP18 (October 2018 to September 2019) South Africa PEPFAR funding of $678 million.

According to Chargé Lapenn, COP19 will prioritise continued HIV treatment scale-up and HIV treatment quality, including adherence and retention, and to ensure that people living with HIV who do not yet receive life-saving anti-retroviral treatment get access urgently.  “This scale-up will focus on the highest burden districts in South Africa, and will support President Cyril Ramaphosa’s pledge to provide HIV treatment to an additional 2 million South Africans by 2020.  Together, we must accelerate the pace in order to reach this goal”, said Chargé Lapenn.

PEPFAR is committed to working with the South Africa government and civil society to support high impact HIV prevention activities, including the important DREAMS programme addressing HIV risk for adolescent girls and young women; support for orphans and vulnerable children; voluntary male medical circumcision; and focused programmes for key populations.  In COP19, the South Africa government and PEPFAR will continue to work together to increase programmes providing PrEP (pre-exposure prophylaxis) to adolescent girls and young women.

Chargé Lapenn added that PEPFAR also plans to fund up to 20,000 health workers   including community health workers to provide HIV services in the highest burden districts.

The PEPFAR South Africa COP19 plan is based on a thorough review of programmatic data, an assessment of performance in 2019, and detailed discussions with the South African government, civil society and community organisations, and implementing partners.  All interventions are aligned to the South Africa National Strategic Plan for HIV, TB and STIs (2017-2022), UNAIDS 90-90-90 goals and WHO guidelines and global best practices.

This funding will continue to be linked to specific key performance targets.  The Department of Health and PEPFAR will continue to closely monitor the implementing partners to hold them accountable and to optimize programmes in order to efficiently and effectively control the HIV epidemic.

As South Africans and other international delegates who include scientists, medical practitioners and representatives from the public sector, NGO and faith-based sectors, and the corporate sector, gather for the 9th South Africa AIDS Conference in Durban ICC this week (11-14 June), Health Minister Dr Zweli Mkhize calls on everyone to take action to protect their own health and the health of their loved ones by making healthy choices, knowing their HIV status, starting HIV treatment immediately if they test positive, and return to HIV treatment if they have stopped.