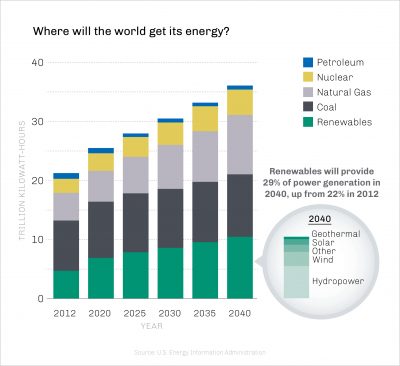 Around the world, investment in renewable energy is outpacing investment in fossil fuels. One big reason is that wind and solar technologies are becoming cheaper to produce.

“Coal- and gas-fired electricity generation drew less than half the record investment made in solar, wind and other renewables capacity,” the UNEP’s Global Trends in Renewable Energy Investment 2016, finds. For the first time, investments in renewables in the developing world outpaced those in the developed world.

An estimated 60 percent of all U.S. utility-scale generation capacity that was added in 2016 was in solar and wind resources, the U.S. Energy Information Administration (EIA) reports.