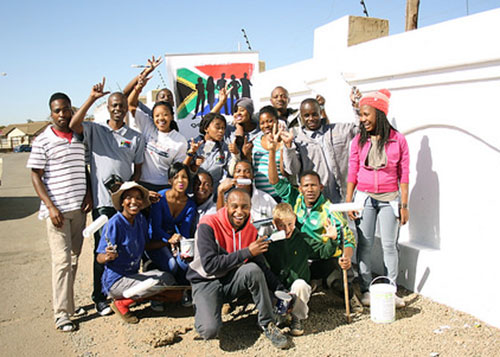 A personal reflection from a volunteer

It may have initially been an icy morning, this past Saturday , but as soon as the home that houses the Mamelodi Society for the Care of the Aged (MASCA) was open, it was abuzz with warm bodies ready to serve. It was a regular occurrence for the home, with several organisations other than GeneratioNEXT volunteering their 67 minutes for Mandela Day. It was to be a messy and heartwarming experience all in one.

Youth organisations ENKE and our GeneratioNEXT  teamed up to paint a section of palisade fence on the grounds of the home as well a section of the perimeter wall. After a few laughs and waiting, the work began and the dozens of volunteers made quick work of the project. Less than two hours later, both paint jobs were complete and then it was time for cake.

The 67 minutes are a commemoration of the life of former President Nelson Mandela’s 67 years of life dedicated to serving humanity. The day is the former statesman’s birthday and so a cake and singing were the order of the day. The elderly residents of the home were excited to participate and to get a piece of the cake.

The celebrations were sealed with traditional dancing performed by a troup of children.

Visit Flickr to view our photo album from Mamelodi:https://flic.kr/s/aHskfWmiBj