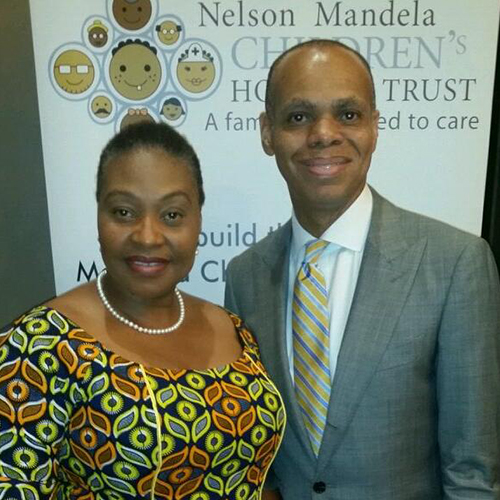 I think that I’m going to take the wise counsel of the MEC for health and not dwell on individual acknowledgements in the room but instead focus on the great work that is being done by all. However, you’ll forgive me if I dwell for a second on our MC Yvonne Chaka Chaka. I must confess I was terribly excited to come and participate in this handoff of GE, but my staff will tell you that my willingness to come and be an active participant was increased the moment I discovered who would be our MC today. I saw you at the United Nations when you delivered incredibly courageous remarks about homophobia and the way in which our lives are all intricately intertwined. When you introduced today’s events and yourself you said that you sing for nothing, but in truth, you sing for everyone, so thank you so very much.

And we all held hands earlier as we swayed back and forth to the chorus of that stirring song. I hope you know the chorus “have you seen Mandela.” We are fortunate enough to be able to say that we have indeed seen Madiba, but we see him not in the flesh but through the acts like today’s activities. We see him in the video that we watched earlier of all those amazing General Electric employees who are giving the very best of themselves to the least amongst us and for generations and generations to come we will be seeing Mandela in the positive health outcomes that will be possible because of the Nelson Mandela Children’s Trust. So yes, we indeed have seen Mandela and we will continue to see Mandela.

I’m so privileged and honored to my friends in GE to be able to celebrate and commemorate this historic contribution. When President Obama was here for President Mandela’s memorial service he said in his address that Madiba’s life and the transition of Madiba’s life compelled him to a place of self-reflection and inspired him to dig in deeper to be the best man he could possibly be. I think that the example that GE is setting today should really embolden all of us to be the best corporate citizens that we can be, the best private citizens that we can be and the best brothers and sisters we can be.

GE is really a sterling example of American commerce, American fraternity. GE has been not only a great company but a great community member. Not only here, but of course in the States as well. You should know that the first place that General Electric expanded beyond North America was here in Johannesburg in 1898 and really did so much to help build up this country. And to their great credit departed, divested during apartheid and returned later when President Mandela was ensconced to help build the Rainbow Nation. So in truth, there has been a long arc to your impressive contribution, to not only commerce but humanitarian interest here in South Africa as well.

And there are so many things you’ve done, but I think there are a few things beyond the contribution today that are noteworthy. For instance, the fact that GE made a decision to build a manufacturing plant right here in Johannesburg – not just to build up your own enterprise, but to build a developmental program that would enable you to transfer important skills to South Africans, so that Africans can lead the GE enterprise through the 21st century and beyond, is of enormous importance.

I also want to note the recent rail export agreement that you signed with TransNet which again enables this country to increase its manufacturing and to grow jobs here in South Africa that will lead to long term stability. So you’ve always known that in order to be a good corporation you have to employ people who have the skillset and are incredibly healthy.

So, I am impressed with what you have done and proud to be able to join with you today and prouder still to note that the director of the United States Agency for International Development, Mr. Raj Shah pledged at the unveiling of the Mandela statue in Washington DC in September that we would be joining with General Electric and lots of other friends to make a major contribution to the Nelson Mandela Children’s Trust, so that we can move to a point where children in this country and throughout the entire southern African region will not be denied healthcare because of their origin or social-economic status.

As we think about Madiba’s legacy, I want to note that he of course would remind all of us that he wasn’t solely responsible for the great transformation that this society. When Yvonne was singing her rousing song at the opening, there was somebody else who was mentioned in that pantheon. She mentioned Albertina Sisulu, the mother of this country. Ma Sisulu, I want to remind everybody, was inspired to become an anti-apartheid fighter because of the intersection between healthcare and human rights. Let’s recall that Ma Sisulu was a nurse. She was trained as a nurse and she told a great story once that for me really concertizes the contribution that GE is making today and all that we need to do to make certain that we get the right health out there.

Ma Sisulu tells this great story about a time when she was about six months into her training as a nurse. She was working in a non-European hospital called Johannesburg General and one day there was a horrific bus accident not very far away from the hospital and there were dozens of injured people who were rushed into the hospital into the emergency room and they were absolutely beyond capacity. The black healthcare professionals appealed to the white healthcare professionals to allow the black patients, many of whom were children, who were on that bus to use the facilities, and they were denied. Ma Sisulu says she never forgot the sight of small children who were bleeding and injured who had to sleep a floor because they were denied access to proper healthcare.

That spurred on her own activism and inspired her to travel all throughout rural Africa with her suitcase on her head of medical supplies providing much needed care. For me, the children’s hospital that is going to be built here is a continuation and extension of that suitcase that Ma Sisulu carried on her head to make certain that every single child had proper access.

So we’re proud of this partnership, proud that it continues in that legacy, and proud of the work that we do every single day through USAID and our PEPFAR program – which has been here in South Africa for ten years now and that has helped, in partnership with Minister Motsoaledi and many others, to reduce the transmission of HIV from mother to child to three percent now, and in 2013 alone provided anti-retrovirals to over 160,000 children in Johannesburg.

It’s been an incredible turnaround in this country and it’s been possible by courage, by dedication, and by our diligent example that we followed from Madiba, from Ma Sisulu and from countless others. So thank you for allowing me to join you here today and Yvonne thank you for your songs. Keep us singing, keep us hoping, and let’s do this together. Thank you so very much.

General Electric Foundation
The GE Foundation, the philanthropic arm of GE, held an event to announce it's $1 million donation to the Nelson Mandela Childrens Fund in support of the Nelson Mandela Childrens' Hospital Trust. The commitment to donate the funding is part of GE's continued investments in improving access to and the quality and affordability of healthcare in southern Africa.