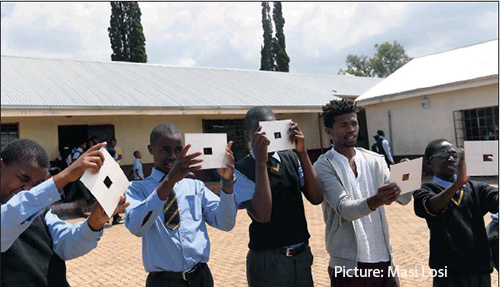 Reatile Moalusi of Pretoria Street Photography teaches Mamelodi High School pupils the basics of photography using a cardboard viewer during a workshop on the meaning of freedom, run in conjunction with the US Embassy

WHAT is freedom? This is a question 50 youngsters will be trying to answer in the coming weeks through the lens of a camera.

Pretoria Street Photography (PSP) recently partnered with the US embassy to facilitate a photography challenge for high school pupils.The organisation is hosting photography workshops for 50 pupils from five schools across Tshwane.The workshops are both theoretical and practical with professional photographers spending a day at each school imparting knowledge.But the workshops are not just about photography, pupils have to explain what freedom means to them. They are taught about how the Constitution and the Bill of Rights came about so people can enjoy the freedom they have today.

Emmanuel Munano, founder and project manager of PSP, said: “So far through the workshops we have picked up that the learners are faced with so many challenges in and around their communities and there’s still a lot to integrate with the concept of freedom.

“When we ask learners what freedom is, they say Nelson Mandela fought for our freedom and that is why we can attend the schools we want and walk around freely. We want them to understand what freedom means to them personally and not just what people from the past have done for them.”Against this background, pupils have been asked to interpret freedom by writing essays that will be translated into a practical photographic assignment.Munano said various topics will be identified and they expected a number of unique assignments that would yield a balanced and fair response about what freedom means to young people.

Pupils have been given cameras and are capturing their understanding of freedom through inspiration from their homes, schools and communities.This project is focused on Freedom Day, but more workshops are planned around environmental awareness.“When I came up with the idea to form the organisation, I wanted to create a society that allowed people to come together to explore and document Pretoria through street photography,” Munano said.The organisation has already done photo walks documenting various parts of Tshwane like Mamelodi, Mabopane, Soshanguve and the Pretoria CBD.“In a quest to tell stories they have raised social awareness and sparked interest in the hearts of many aspiring photographers to learn the craft of photography,” added Munano.“The organisation promotes candid pictures, the base of street photography, where you engage with the subject on the streets. We look for hidden elements in a candid way to give it character.”

PSP has five members who work together to ensure the organisation functions well and achieves its vision. It is working on getting enough work space to train more youngsters.It is also looking for a suitable space to exhibit the freedom pictures captured by the pupils.Ultimately, PSP aims to roll out its vision nationally to create awareness on various issues through the art of street photography.