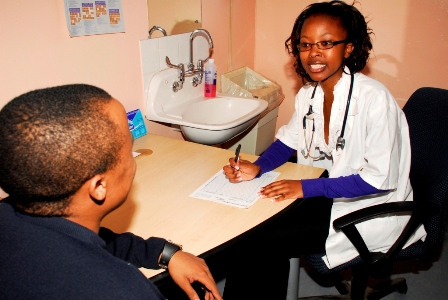 Sihle Lawana, one of South Africa’s first Clinical Associates, consults with a patient at Victoria Hospital in the Eastern Cape Province.

May 8, 2011 was a landmark day in South Africa as the Faculty of Health Sciences at Walter Sisulu University celebrated the official graduation of the nation’s first group of Clinical Associates at its Mthatha Campus.

Similar to Physician Assistants in the United States, Clinical Associates are university-trained medical professionals who will work primarily at district hospitals in underserved areas of South Africa where there is often just one practicing physician per every 4,219 people.

Although many of the graduates committed to full-time jobs earlier in 2011 South Africa’s first Clinical Associates all proved eager to return to Walter Sisulu for the graduation ceremony last spring.

The group of 23 Clinical Associate graduates achieved a 100 percent success rate, each earning a Bachelor of Clinical Medical Practice (B.CMP) degree following their three years of rigorous, skills-based study — the bulk of which was performed in clinical settings where they gained invaluable first-hand experience working with skilled practitioners and patients alike.

“I began working as a Clinical Associate at Victoria Hospital in Alice on January 3, 2011. There are only eight doctors, so I know that they really appreciate the work we are doing here. I think the training I received at Walter Sisulu has prepared me to make a difference,” says Sihle Lawana.

“That is important to me because I want to be recognized as a skilled professional within the hospital. It’s also my goal to help improve the quality of care for people in the Eastern Cape, especially the elderly and those with chronic conditions like HIV,” she explains.

As Executive Dean of Faculty of Health Sciences at Walter Sisulu University, Prof. Khaya Mfenyana understands the critical shortage of skilled health-care professionals in rural areas all too well.

“In the Eastern Cape where our Clinical Associates are working, patients often travel great distances to go to hospital because local health-care clinics are so understaffed. The Clinical Associates will help doctors by relieving some of their workload.

This will allow the physicians to focus on more complex cases,” he says. “It also means that patients will be treated sooner and closer to their homes, which will help reduce South Africa’s disease burden and help improve overall patient outcomes.”

Calling the graduation a step in the right direction for the country’s health system, Deputy Health Minister Dr. Gwen Ramakgopa praised the group, noting, “We will now have mid-level health workers who are well-trained and who will be closer to where people live.”

Thanks to funding from PEPFAR, the American International Health Alliance’s HIV/AIDS Twinning Center has been supporting Walter Sisulu’s Clinical Associates program since 2010 through a partnership with the University of Colorado Denver, home to one of the oldest Physician Assistant programs in the United States.