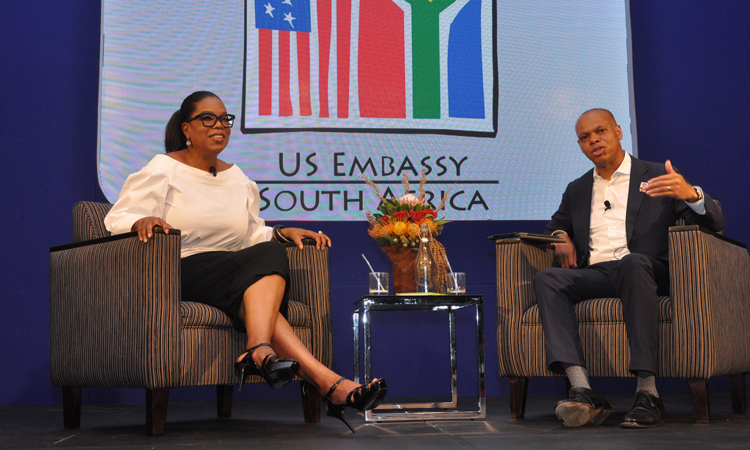 U.S. Ambassador Patrick Gaspard hosted an audience of young South African women on Friday for what may be a once-in-a-lifetime opportunity to meet global media leader and philanthropist Oprah Winfrey. Ms. Winfrey, who is in South Africa celebrating the sixth graduating class the Oprah Winfrey Leadership Academy for Girls, attended the event and spoke to participants in the U.S. government-funded DREAMS program, and alumni of U.S. exchange programs.

The event commemorates the 16 Days of Activism Against Gender Based Violence campaign, currently underway. In a bit of a role reversal, rather than lead the interview, Ambassador Gaspard interviewed Oprah Winfrey about her about her life experiences, influences, and how she has overcome challenges to achieve great success. Speaking about Ms. Winfrey, Ambassador Gaspard said, “She has been invested in women and in South Africa, and has been an incredible force in the world. There is so much love in this room and in this country for her. It is an honor to host her today.”

Ms. Winfrey encouraged the South African young women in the audience, many representing a demographic that is of greatest concern to leaders and healthcare providers in the fights against HIV/AIDS because they are eight times more likely to be infected than their male peers, to take agency over their own futures and to “be the change they want to see” in their communities.  Ms. Winfrey said, “I love this country so much. From the very first time I visited and met Madiba, I said the way we need to change the world is to change the lives of young women. That is why I invested in Oprah Winfrey Leadership Academy for Girls.” She encouraged the audience to remember that “excellence has a voice and if you do something better than everyone else, people will notice.” She challenged them with the question: “what are you going to do in your life that will make a difference in someone else’s?”

Among audience members were also DREAMS Ambassadors, a selected group of 46 young women between the ages of 18-24 who were selected based on demonstrated leadership and a record of community activism on behalf of other girls and young women in their communities. The DREAMS Ambassadors work with non-governmental organizations to implement DREAMS activities in their communities.

DREAMS is a global partnership between the U.S. President’s Emergency Plan for AIDS Relief (PEPFAR), Bill & Melinda Gates Foundation, Girl Effect, Johnson & Johnson, ViiV Healthcare, and Gilead.   It seeks to reduce new HIV infections in adolescent girls and young women in 10 sub-Saharan African countries, including South Africa. In South Africa, DREAMS is being implemented in partnership with the South African government as a core component of the She Conquers campaign. For more information about the U.S. Mission to South Africa’s efforts to support cultural exchange and promote mutual understanding, follow us on Facebook at USEmbassySA.