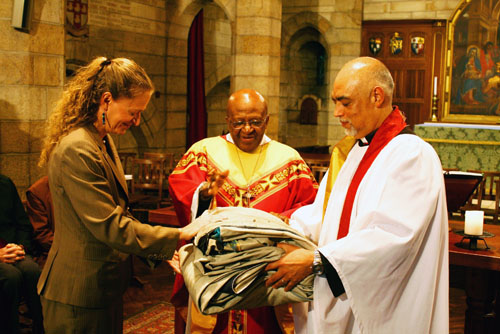 Moments after it was lowered from its prominent position in Cape Town’s St. George’s Anglican Cathedral, Nobel Peace Laureate Desmond Tutu blessed a panel from the AIDS Memorial Quilt and handed it over to U.S. Consul General Erica Barks-Ruggles June 22 for shipment to Washington, D.C.  “Bless this quilt and the memory of those we have lost,” said Archbishop (emeritus) Tutu in a simple but moving ceremony following an early morning service.

The Cape Town panel is one of 48,000 that are being reassembled in Washington, D.C. for the first time in many years, an initiative of the NAMES Foundation.  The quilt will be in Washington to mark theXIX International AIDS Conference, which begins July 22.  The quilt will also be part of the Smithsonian Folklife Festival June 27-July 1 and U.S. Independence Day celebrations July 4-8.

Tutu thanked the U.S. Diplomatic Mission for facilitating the shipment of the panel.  “It is an honor,” replied the Consul General, noting our long partnership in South Africa in the fight against HIV/AIDS.  The panel will travel to Washington, and return to South Africa, via diplomatic pouch.