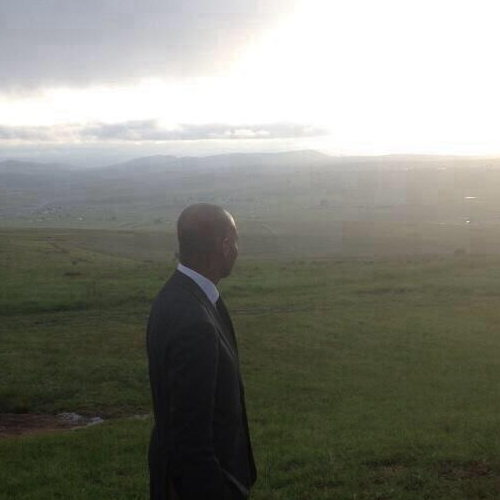 Above: Ambassador Gaspard at Nelson Mandela’s Qunu village in the Eastern Cape province

The finality of a funeral has been replaced with the uncertainties of life. The rhythms of the Indian Ocean a metronome for travelers pausing by its banks in contemplation of waves lapping the rocks like the counting off of hours. Ten days of mourning, celebration and introspection are unpacked here in this city that was once an outpost for the first British troops who came into contact and conflict with Xhosa communities. The narrative of Reconciliation stretches back but so far.

In life Nelson Mandela excited reflection, therefore it is no surprise that his transition should invite self analysis around the globe. A shift in one’s personal center of gravity. In some, the introspective gaze has quickly become an indictment of others for failing to equal the measure of the great man. Perhaps an interrogation of our era is more in keeping with the spirit of his own leadership.

In his first encounter with Mandela, F.W. deKlerk described his surprise at discovering that the longtime prisoner was “ramrod straight” in his bearing. Mandela’s physical presence often seemed like a dancing exclamation point at the end of a declaration. In his final years, the dignity and aura were maintained but his stance curled ever so slightly into a question mark. It’s that opaque punctuation that yet lingers in the mind’s eye.

Questions abound about legacy and the sustainability of his vision. In his return to Qunu, village elders accompanied his remains in the tradition of Ukubuyisa, talking to his spirit to guide it home over mountains and rivers. Who will perform Ukubuyisa for the spirit of his remarkable nation? Who will lead it over the mountains of acute economic disparities and rivers of disharmony?

In his poignant eulogy at his friend’s funeral Ahmed Kathrada openly grieved that Mandela’s passing left his life “in a void.” Perhaps this emptiness can only be approached by those remaining comrades who labored in the rock quarries on Robben Island. But somehow this cri de coeur seems to be a testimonial of the people. What fills the silence of the void? I’ve heard the answer to this cry on Vilakazi Street in Soweto where citizens of this young republic burst into triumphant songs to declare their ownership of the future.

I’ve heard it in the passionate work of South African Health Minister Aaron Motsoaledi as he partners with the US through our PEPFAR program to develop a lasting healthcare infrastructure. I’ve heard it in the confident pride of young South Africans who have applied in waves for the Washington Fellowship for Young African Leaders that President Barack Obama announced in his Johannesburg town hall. Mr Kathrada’s void is an opportunity for us all to grab a spade and to begin to fill the space. Madiba’s good work will not be interred with his bones.

“In quiet, reflective moments — rare during my active struggle, all too plenty during confinement — I recalled very well the clear, cold streams that I grew up with around Qunu…Ndiwelimilambo enamagama means: “I have crossed famous rivers.” … it means that one has travelled a great distance, had wide experience, and gained some wisdom from it. I still have, many rivers yet to cross, as do we all. As there is no standing still, and no turning back, let us now…cross the river together.” – Nelson Mandela