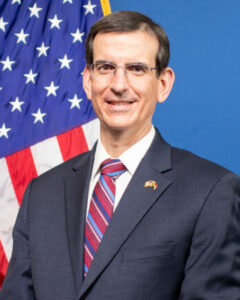 From 2014-2017, Mr. Spera was Acting Deputy Chief of Mission and Political/Economic Counselor at the U.S. Embassy in Dar es Salaam, Tanzania.  Prior to Tanzania, he served as the Crisis Management Coordinator in the U.S. Department of State Operations Center in Washington, DC.  Earlier in his career he served in assignments in Mongolia, Canada, and Chad.  Before entering the Foreign Service, he worked in the U.S. non-profit and private sectors, focusing on education and workforce development policy.

Mr. Spera holds a Master’s of Public Policy from Georgetown University in Washington, DC and a Bachelor’s Degree in Political Science from Stockton University in Pomona, New Jersey.  His wife, Marissa Maurer, is a retired U.S. Foreign Service Officer, and they have two daughters.  He speaks Swahili and French.