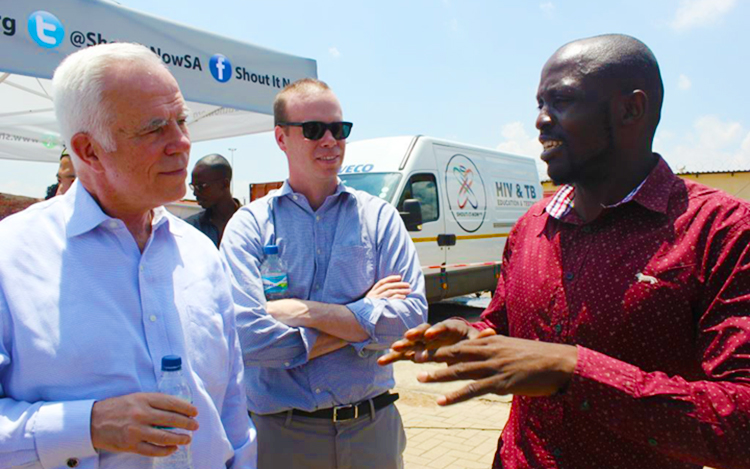 Consul General Christopher Rowan visited a couple of sites that demonstrate the unshakable commitment of the United States to South Africa in combating HIV/AIDS and reducing stigma, both around testing and treatment and for children in families affected by HIV. CG Rowan visited the Shout-It-Now testing site in Tsakane, Johannesburg and Nanga Vhutshilo, a children’s care and education facility in Moroka, Soweto. Both projects receive support from the United States Government through the PEPFAR program.

At the Shout-It-Now site, the Consul General heard about the remarkable success the group is achieving in efficiently expanding the availability of testing and counseling services and using simple technology to stay connected with the community. CG Rowan took an HIV test and promptly received his results via SMS after leaving the site. Next, CG Rowan visited Nanga Vhutshilo, an NPO dedicated to caring for over 300 orphaned and vulnerable children on a daily basis. He spoke to the community members and children who gathered to commemorate World AIDS Day just a couple of days earlier and to celebrate the holidays, saying “This is a special day not only to commemorate World AIDS Day, but also to celebrate all you have accomplished to help orphans and vulnerable children, and their caregivers.

Together, we have come so far – mother-to-child transmissions down from 30% to about 3%, and South Africa has approximately 3 million people on anti-retroviral treatment, the largest program in the world. These are all amazing accomplishments, but we cannot lose sight of the fact that we still have a long way to go. That is why the work you are doing here at Nanga is so vitally important. If we want to achieve an AIDS-free generation, we need strong children, and that requires strong families and a growing community. You are a critical part of achieving that goal.” Consul General Rowan’s visits to both sites offered a great opportunity to see firsthand what a strong and lasting partnership can achieve.