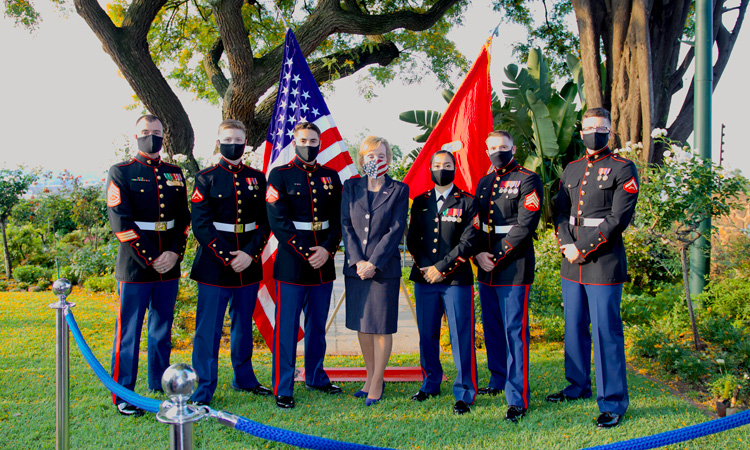 "I am deeply grateful to all the Marines assembled here today for your 'hardness,' for your dedication, for your love of country, and for your endless defense of our constitution & government." - Ambassador Lana Marks

On November 1st, 1921, John A. Lejeune, 13th Commandant of the Marine Corps, directed that a reminder of the honorable service of the Corps be published by every command, to all Marines throughout the globe, on the birthday of the Corps. Since that day, the men and women of our Corps have continued to distinguish themselves on many battlefields and foreign shores, in war and peace.

Ambassador Lana Marks: “I am deeply grateful to all the Marines assembled here today for your ‘hardness,’ for your dedication, for your love of country, and for your endless defense of our constitution & government. As the tip of the sword, you are the front line of our Embassy and our country and we are all indebted to you for your service.”

At the celebration, it is customary worldwide each year wherever duty takes them, Marines pause to celebrate their birthday by sharing a cake and usually a holiday meal. A sword is used to cut the cake to remind us that they are a band of warriors, committed to carrying the sword so that our nation may live in peace. It is traditional that the first slice of the traditional birthday cake is presented to the Guest of Honor, in this case, Ambassador Lana Marks. The next piece, to the oldest Marine present, followed by the youngest Marine present. The passing of the cake from the oldest to the youngest marine symbolizes the passing of history and traditions to the next generation.

As the adjutant announced, “In every battle and skirmish since the Birth of the Corps, Marines have acquitted themselves with the greatest distinction, winning new honors on each occasion until the term “Marine” has come to signify all that is highest in military efficiency and soldierly virtue.

This high name of distinction and soldierly repute we who are Marines today have received from those who preceded us in the Corps. With it, we also received from them the eternal spirit which has animated our Corps from generation to generation and has long been the distinguishing mark of Marines in every age. So long as that spirit continues to flourish Marines will be found equal to every emergency in the future as they have been in the past…our nation will regard us as worthy successors to the long line of illustrious men who have served as “Soldiers of the Sea” since the founding of the Corps.”