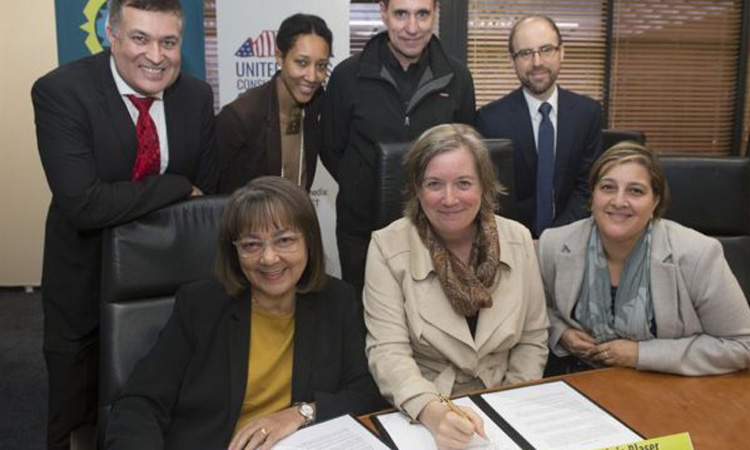 U.S. Consul General Virginia Blaser, Executive Mayor Patricia De Lille, and representatives from the U.S. Consulate and City of Cape Town gather for the signing of the agreement.

The City of Cape Town has signed a new grant agreement with a US Trade and Development Agency (USTDA) on Thursday to study the effective use of natural gas distribution networks to increase energy sources of both Cape Town and the Western Cape.

The City’s Executive Major, Patricia De Lille said in a statement, “The Consul General of the United States, Virginia Blaser, and I signed an agreement which holds very exciting possibilities for the city and its residents.”

The grant , which totals just over R12.7 million, will be used for the feasibility study regarding the use of natural gas in Cape Town is aimed at increasing the City’s efforts in reaching a goal of providing a greater mix of energy sources to offset the use of fossil fuels in producing electricity.

Consul General Virginia Blaser said, ”The United States Government is pleased to continue our long-standing partnership in economic growth and development with the Western Cape Province and Cape Town. As the US Consul General to the Cape Provinces, I’m proud Americans are working with South Africans to find innovations, resources, and opportunities toward creative solutions in the region. I also commend one of our smallest and most dynamic US Government agencies, USTDA, for heading this key collaboration for the American people,”

The Cape Town Mayoral Committee has expressed their gratitude for the support from the United States Government as the funding will make it possible for the City to broaden its energy use options.

“This grant is in line with our resource efficiency goals as outlined in the Organisational Development and Transformation Plan where we are looking at various ways to diversify our energy mix and reduce our over reliance on coal,” said De Lille.

The grant will allow the city to undertake a study to assess the technical, economic and financial viability of natural gas distribution network, along with usage options of gas, including the repowering of existing power plants in Cape Town. This study is indeed aligned to the City’s Action Plan for Energy and Climate Change and Cape Town Energy2040 Vision that set out plans toward a low carbon emissions City for the future. The estimated completion date for the study is early 2019.

A target of at least 300 MW from natural gas or cleaner supply options for electricity generation has been set to be achieved in 2020 as part of the City’s goal to have at least 20% of the energy produced from renewables.