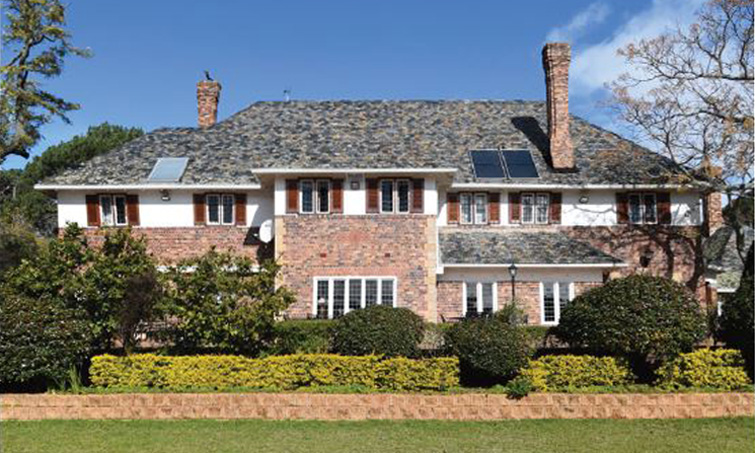 Throughout its history, Kearsney House remained an important site for diplomatic relations – particularly in 1993, when Nelson Mandela met with U.S. officials at the residence.

Kearsney House will return to active use as a chief of mission residence in 2021, having served as the home of the U.S. ambassadors to South Africa since 1949, when North Winship became the first ambassador and occupant of Kearsney House. During this time, ambassadors were on property for approximately six months of the year, and, in their absence, official visitors from the United States often stayed at the home.

Throughout its history, Kearsney House remained an important site for diplomatic relations – particularly in 1993, when Nelson Mandela met with U.S. officials at the residence to discuss the lifting of economic sanctions to bolster social progress under the African National Congress, to hasten the end of apartheid. South Africa’s first democratic elections were held the next year.

The landmark meeting at Kearsney House followed the important work of Ambassador Edward Perkins, appointed in 1986, who was the first African American ambassador to South Africa, and that of Ambassador William Swing and Ambassador Princeton Lyman who led negotiations to set in motion U.S. policy in support of a democratic South Africa free from the bondage of apartheid.

While Pretoria is the executive capital of South Africa, and Bloemfontein is the judicial capital, Cape Town is the seat of the South African Parliament – historically, the ambassador was in residence during the six month legislative sessions. Twenty-seven countries, exclusive of the United States, maintain diplomatic residences in Cape Town. Major trading partners and interested parties are based in Cape Town, taking advantage of the confluence of people, resources, and ideas legislative sessions call together.

The two-story, brick building is a hallmark of Arts and Crafts design as the style developed in South Africa in the 1930s. The residence is an important example of the Arts and Crafts style designed by noted South African architect William Hood Grant (1877-1957) and renovated by Cape Town architect Brian Mansergh (1897-1977). Grant was well regarded for his residential and commercial building designs, and Mansergh was likewise recognized for his residential work. The two-story, brick and plastered house illustrates the fine craftsmanship of the Arts and Crafts movement and the expressions of the Tudor and Jacobean styles revered by the business elite of Cape Town in the 1920s and 1930s and mastered by both Grant and Mansergh.

The house was originally commissioned by Gladys Daisy Garlick, wife of the director of Garlick Limited, a nationwide chain of upmarket department stores. Grant drew plans for the house in 1930 and it was completed the following year. Kearsney House, as the residence was known, is located in the lower foothills of Table Mountain. The Bishopscourt neighborhood in the southern suburbs of Cape Town originally housed a number of the manor houses and terraced estates, such as Kearsney, they authored in the interwar period have since been converted to diplomatic residences. In 1947, the U.S. government acquired the property from the Garlick family for the American legation and renovated Kearsney for diplomatic use. The U.S. government contracted with local architect and environmentalist Mansergh for the alterations.

Kearsney House was placed on the OBO List of Significant Properties in 2001. The listing established the residence as a real property heritage asset of the Department of State, also known as Culturally Significant Property, in recognition of its architectural design.

The character-defining features of the building and landscape date from this era (1931-1948). These include the decorative half-timbering detailing above the entrance, the overall asymmetry of the form and plan, tall corbeled brick chimneys, and timber casement windows and Dutch entry door. Inside, the materials and workmanship associated with the Arts and Crafts movement are evident in the wrought iron handrails, textured plaster, fireplace surrounds, and wood paneled doors. The open terrace to the north of the house and south retaining wall are also significant elements of the property, reminiscent of the landscape originally created throughout the Bishopscourt neighborhood to give the houses the best advantage in hilly terrain with views to Table Mountain National Park and immersed in the rich flora region of the park.

The twenty-one ambassadors who lived in Kearsney House are:

The United States in Cape Town

President John Adams appointed John Elmslie as America’s first consul to the Cape in 1799. Elmslie’s role was acknowledged, yet limited because the Cape was controlled by the British and the Governor considered America’s envoy a British subject – not a U.S. citizen.

The British held the Cape Colony into the twentieth century. In 1910 the Union of South Africa combined the former Transvaal and Cape, Natal, and Orange River colonies. The new territory divided the branches of government between the capital cities of Cape Town, Pretoria, and Bloemfontein. In the 1920s, South Africa and other dominions within the British Empire were defined as autonomous units of the Commonwealth. In 1929 the United States opened a legation in Cape Town, establishing bilateral relations with the South African government.

Cape Town is a center of political and socio-economic life in South Africa, bringing lawmakers and business interests together during legislative sessions since the early twentieth century. The acquisition of Kearsney House in the late 1940s suggests the importance of a dedicated diplomatic presence in the city, a significance underscored in the opening of the new consulate office building in the 2000s. The two architectural statements bookend a transatlantic movement for civil rights, leading to advocacy and bringing marquee figures such as Senator Robert Kennedy to Cape Town in the 1960s and more than sixty U.S. government representatives to the inauguration of Nelson Mandela as President of South Africa in 1994.

Cape Town attracts commercial and cultural ventures facilitated by geography and access to lawmakers and financing. Two of the continent’s top ranked universities are in Cape Town, and 75 percent of all U.S. travelers to South Africa visit Cape Town. Opportunities for cultural engagement are high – and Kearsney House near Table Mountain provides a verdant setting for today’s negotiations for a more equitable and sustainable future for South Africans.