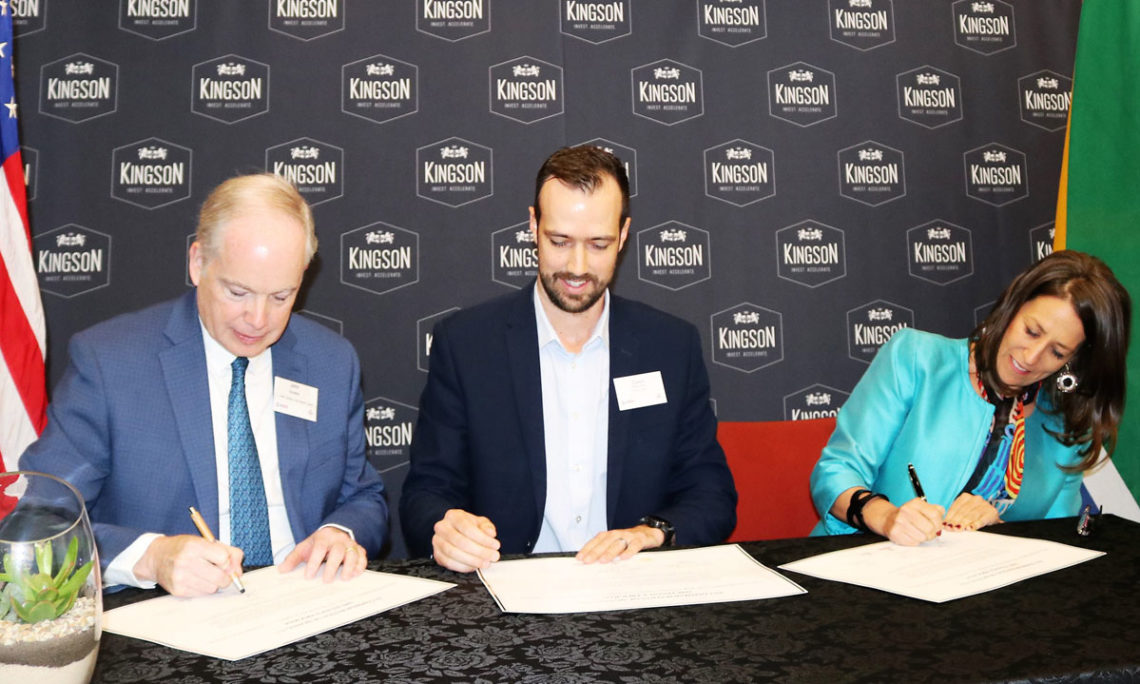 The USAID DCA $10 million guarantee with Kingson Capital is intended to attract investors to the Kingson SME Fund and to enhance Kingson’s capacity to provide financing for black-owned small and medium sized businesses and technology enabled start-ups in South Africa.

Through the use of DCA loan guarantees, USAID Southern Africa incentivizes financial institutions to begin lending in new sectors and to new borrowers. Since its creation in 1999, the DCA has leveraged more than $5.4 billion in private capital across 76 countries.

02 April 2019; Durban: With the launch of Kingson Capital’s new R 400 million Fund Two, this dynamic, Durban-born Venture Capital (VC) Company is committed to developing and supporting South African start-ups in an effort to meet both society and Government’s resolve to create jobs and sustain economic development in this country.  Now, cementing the organisation’s growing reputation as a founder-friendly VC, comes the announcement of a Guarantee Commitment from the U.S. government through the United States Agency for International Development (USAID).

“Effectively, the guarantee means that up to $10 million of funds disbursed as debt to our portfolio companies will be supported by a 50% guarantee by the U.S. Treasury through the USAID Development Credit Authority (DCA). This means that founders and high-growth stage small and medium enterprises (SMEs) will benefit from a wider pool of access to capital to support their growth,” says Gavin Reardon, Founder and General Partner at Kingson.

Founded in 2015, Kingson Capital is a Venture Capital Company committed to providing venture capital for SMEs enabling them to accelerate their growth potential. Their newly launched High-Growth Tech and Black-Owned SME Fund has the ability to facilitate a blended investment return structure for corporate investors, allowing them to not only score B-BBEE points under both the Enterprise Development and Supplier scorecards, but also expose the corporate investor to a whole new class of assets through its tech fund.

This commitment from USAID changes the playing field substantially for Kingson as well as South African businesses. “This partnership is intended to attract investors to the Kingson High-growth Tech and Black-owned SME Fund and to enhance Kingson’s capacity to provide financing for black-owned SMEs and technology enabled start-ups in South Africa,” says Jessye Lapenn, Chargé d’Affaires of the U.S. Mission to South Africa. In a nutshell, this partnership means that South African start-ups will now have an added leg-up when it comes to scaling the proverbial growth ladder on their journey to becoming fully sustainable businesses with tangible job creation.

The lack of access to credit is one of the primary constraints to economic growth throughout the developing world. Despite holding large sums of local capital, local banks and other formal financial institutions are often reluctant to lend this capital to small and medium-sized enterprises, which are primary drivers of broad-based job creation and growth. Using Development Credit Authority (DCA) loan guarantees, USAID incentivises financial institutions to begin lending in new sectors, to new borrowers. This increases their bottom lines whilst promoting growth and security. Since its inception in 1999, the DCA has leveraged more than $5.4 billion in private capital across 80 countries and backed loans to nearly 350,000 borrowers.

“USAID had a strategic agenda to support fintech in Africa and we were aligned with that as part of our investment mandate. In addition, our own focus has been in the tech and fintech space as we see the enormous potential that local tech businesses have in changing the way business and economic growth happens in this country,” says Reardon. “With our focus on early stage investing, this partnership with USAID enables us to mitigate a big part of the risk.”

This partnership was announced today, 2 April, at the Durban ICC. In addition to the announcement, an informed line up of experts were present, including Jacko Maree – one of President Ramaphosa’s investment envoys charged with raising $100 billion for South Africa as part of Invest SA – as well as other distinguished guests and panellists including:

“The Kingson DCA Guarantee will grow South African businesses, create jobs, and improve the livelihoods of South African communities,” says Lapenn. The signing of this agreement reinforces Kingson’s commitment to economic growth, and the way that the VC’s innovative investment approach seeks out and supports entrepreneurs who have unique and scalable business concepts. With the USAID partnership in place, the potential to take the SMEs far beyond the survivalist stage and into a profitable growth phase, with far-reaching economic ripple effects for all involved, is that much closer to becoming a reality.