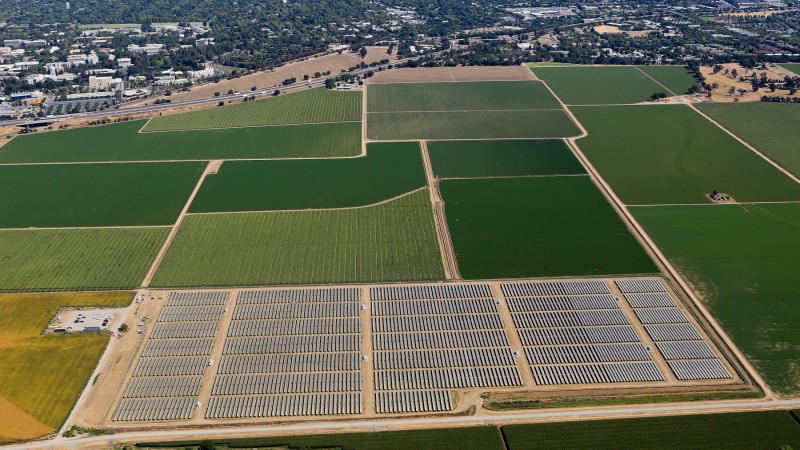 This solar farm at the University of California Davis supplies 14 percent of power used on campus. There are solar installations on rooftops and parking lots too. (UC Davis)

This solar farm at the University of California Davis supplies 14 percent of power used on campus. There are solar installations on rooftops and parking lots too. (UC Davis)

Decarbonizing the economy is an intellectually electrifying and energizing opportunity for California’s universities and students.

It is abundantly clear to most people working in the energy field that the transition to renewable resources — such as wind, sun and water — for supplying the bulk of California’s power needs has already begun and is as inevitable as it is irreversible.

During the last decade, renewable energy conversion technologies have undergone a dramatic reduction in cost as a result of global economies of scale, a focus on local air quality issues and an awareness of the dangers of climate change.

Renewables are rapidly taking over as the least expensive, most competitive option for energy globally. A majority of all power plants built in the United States and around the world over the last couple of years generate renewable electricity.

Investment in renewable energy has overtaken investment in fossil fuels. This energy market trend and rapid technological evolution, along with with visionary regulatory frameworks ensuring a place for innovation and individual participation in the energy sector and are the driving factors behind the revolutionary changes set to take place in the energy field.

An explosion in green jobs

Transitioning to a renewable resource–based energy system and reducing greenhouse gases do not come at the expense of jobs or investment; in fact, quite the opposite.

The result of renewable energy entering California’s grid on a massive scale both from large, centralized power plants (totaling over 13,000 megawatts installed) and from small, customer-owned distributed systems like rooftop solar (totaling an additional 5,000 megawatts installed) has created an accelerated and pressing need for technological evolution and an unprecedented opening for highly qualified experts to design and operate the grid of the future.

Today the solar industry alone employs more people than all the California utilities combined. California also attracts more clean tech investment than Europe and China. If the state were a country, it would have the world’s fifth-largest economy (behind the U.S., Germany, Japan and China), and by all indicators, the industry is booming.

This fast-moving process is now literally democratizing the energy field as the Golden State transitions to a cleaner, more decentralized, digitized and distributed model. Undoubtedly, clean energy jobs of the future are going to be in the clean energy arena and widely dispersed on a geographic level, as opposed to centralized around coal mines and polluting fossil power plants.

This industry-transforming opportunity has been embraced by California’s leading educational institutions, which are now taking a lead in not only educating the academic brain trust of the future, but also in creating progressive programs and hands-on opportunities for students to enter the energy markets as experts and, more importantly, as practitioners who are already ahead of the curve and can hit the ground running with a portfolio of commercially viable, cutting-edge programs and disruptive solutions.

Consider some of the major universitywide initiatives underway in California:

We know that the grid of the future will present numerous technical challenges, which in turn can become empowering opportunities for students to participate in the creation of a myriad of technology-based solutions that will transform the energy sector and ensure California’s leadership role in making the energy future sustainable and free of greenhouse gas emissions.

Universities are inspiring the energy innovators of the future. Across UCLA, academics and students are working with architects, urban planners, environmentalists, sustainability professionals, water departments, power providers, and electric vehicle and appliance manufacturers to create viable solutions for real-life problems. These student entrepreneurs are creating companies that are able to enter the energy markets and help individual customers control the energy use of their homes, charge their electric vehicles according to energy market prices, or feed solar power back into the grid or a storage system at the perfect time when it is needed.

The growing interest in energy solutions that we are witnessing in our institutions of higher education did not happen in a vacuum. The steady march toward more renewables supplying our power has been ensured by California’s long-standing commitment to protecting its extraordinary environment. By 2030, when the state complies with its own laws, California will already be getting well over half its electricity from renewable sources. By 2050, state policy calls for a doubling of mandated 2030 greenhouse gas reductions from 40 percent below 1990 levels to 80 percent below. That means California will likely have to generate all its electricity with renewables, in addition to lowering greenhouse gas emissions in other energy sectors like transportation and natural gas end uses. These are revolutionary changes.

Energy storage: the key to a renewable future

A cornerstone of implementing this energy transformation to a system based on renewables in the most efficient and reliable way is developing a sophisticated, integrated power grid to allow for the trading of renewable resources over long distances and a complementary system of storage solutions that will enable operators to reliably run the grid when variable resources such as solar and wind power are not generating.

This storage necessity brings opportunities for new business models, industries and high-quality jobs. California has been ahead of the game on advancing energy storage development, particularly short-term battery storage. California regulators also have opened up the storage market to other technologies, including but not limited to flywheels, compressed air and ice storage.

The electrification of transportation and the use of vehicle-to-grid technology like that being piloted at UCLA provides the pathway to use the increasingly powerful batteries in cars, trucks and buses to store and dispatch virtual power plants’ worth of energy on potentially a statewide basis. These same batteries also provide local distributed energy resources that serve additionally as portable power during emergency and security events.

Alongside batteries, the energy system of the future also will need large-scale, long-term storage solutions. An exciting new development is the renewable power-to-gas opportunity, which can scale up to the terawatt-hour level and carries the added economic and resource efficiency benefit of using existing gas infrastructure. (A terawatt is a unit of power equal to 1 trillion watts.)

Power-to-gas uses surplus renewable electricity that would otherwise be unused and wasted to make renewable hydrogen from water. This renewable hydrogen can be used in multiple ways, such as to fuel zero-emissions fuel cell vehicles, to store energy for later use in stationary fuel cells, or for injection into the existing gas grid to decarbonize natural gas supplies. Additionally, the hydrogen can be combined with carbon or carbon dioxide, for example, captured from a power plant, industries, or even renewable methane, which can be stored in existing infrastructure and used just like natural gas — except that it’s made with renewable electricity and captured carbon instead of fossil fuels.

Proof of concept for this renewable hydrogen idea is now being provided by U.C. Irvine. This Southern California university recently unveiled the first solar-powered power-to-gas demonstration project in the United States. The hydrogen created by their solar-powered electrolyzer is pumped directly into the gas grid, as well as into the university’s cogeneration facility, which is also an integral part of a campuswide microgrid linking campus buildings, solar generation, battery and cold water energy storage, electric vehicle charging and all other energy uses.

Californians should all take pride in the fact that one of our universities is the first to demonstrate how variable surplus renewable energy can be used to generate renewable hydrogen, which in turn can be stored or used as a fuel in the existing gas infrastructure and power plants. In the very near future, expect to see these bright students from U.C. Irvine creating a new company that will be able to build a solar-powered energy-to-gas facility right next to all of California’s gas plants. That solution would immediately reduce greenhouse gas emissions on-site and demonstrate an additional use for existing gas infrastructure, while accelerating the transition to a 100 percent renewable energy future.

Regardless of how one feels about natural gas’s contribution to greenhouse gas emissions, a greater coordination between the electricity grid and existing natural gas delivery systems (pipelines and storage) will become increasingly critical to provide reliable supplies of renewable energy.

In an energy system based on renewables, not only will the electricity grid continue to deliver power for traditional uses like keeping the lights on, but it also will serve new functions across sectors, such as charging batteries for storage and electric vehicles, and powering electrolyzers that make renewable hydrogen, which can be delivered by our existing gas infrastructure.

In addition to transmission and delivery of renewable energy without the need for new investment, the existing gas infrastructure inherently comprises a massive energy storage resource that could provide more than 13 terawatt-hours of energy storage in southern California infrastructure alone.

California regulators therefore have a role to play in exploring and supporting the development of a viable renewable energy–based power-to-gas market. Creating a diverse renewable energy and gas market would be a useful tool to ensure a successful multisectoral program to reduce greenhouse gases.

Here, at the beginning stages of our renewable energy revolution, it’s not possible to predict all the technologies and directions California will embrace and implement on its way to a tomorrow that is 100 percent powered by renewables. But our vision does allow us to see that California will dare to lead and will proactively demonstrate to the world how a region with all the complexities of being the fifth-largest economy in the world can make the transition cost-effectively and reliably.

The global energy leadership is watching every step that we take, and our upcoming energy innovators, as demonstrated by students at UCLA, Stanford and U.C. Irvine, are accepting their responsibility to seize the moment and lead us to a sustainable and prosperous energy future. The sooner we embrace and support their mission and goals, the better chance we have at ensuring a livable climate for those same students and their children after them.

Angelina Galiteva is currently president of NEOptions Inc., a renewable energy and new technology product design and project development firm. She founded the nonprofit Renewables 100 Policy Institute, for which she is board chair. She also is serving her second term on the California Independent System Operator Corporation Board of Governors and chairs the World Council for Renewable Energy.

She previously served as executive director of the Los Angeles Department of Water and Power and head of its Green LA, Environmental Affairs and New Product Development Organization. While at the municipal utility, she was responsible for strategic positioning and the environmental compliance departments.