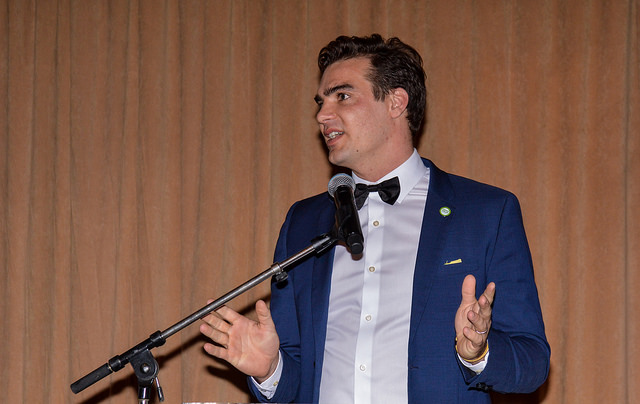 We are living in an exciting time. We know climate change is real; we feel impacts every day. But we also know what we need to do to tackle it. To quote the U.N. Secretary General Ban Ki-moon: “We are the first generation that can end poverty, the last that can end climate change.” I want to focus on the fact that we can solve climate change.

Global leaders have spoken up! In the hottest year on record, in 2015, we finally reached global unity with the presentation of the Paris Climate Change Agreement. It was the fastest ratified agreement under the U.N. to date! And this year, after the Agreement entered into force, the urgency for climate action was present at COP22 in Marrakech.

And even so, we still see global greenhouse gas emissions rising.

To bend the emissions curve, we need a global movement. We need to trigger the emotions in our global society in support of climate action. We need to make climate change relatable and tangible. And there is no better way of doing that, than by communicating the opportunity in climate change.

I am optimistic because climate change offers an opportunity for a transition to a low carbon and resilient future. This is the opportunity of our generation to find our purpose and to build the future we want for us and for generations to come.

In creating climate opportunities it is important to direct these to those most affected. We cannot leave anybody behind because climate change is also a justice issue. Those already having to move homes because of sea-level rise or extreme weather events, or those losing their jobs in the fossil fuel industry, all need to become a part of the solution. Our research at the World Bank shows that an immediate push on climate-smart development can keep more than 100 million people out of poverty.

I am optimistic because I have a 9-month old son, and when he grows up the world will be a different place. I can see a future where homes and villages in Africa will be powered by solar panels on their roofs, where fossil fuel companies have transitioned to being energy companies with diverse portfolios of renewable energy, where mobility is largely electric, where our consumption patterns are in line with our global carrying capacity, where our forests are preserved and urban spaces are made green, and where there is a price on carbon and the economics favours green growth.

And we are already building that future. In South Africa we have seen a renewable energy revolution with more than 30 operational projects and with plans of almost 38GW of wind and almost 18GW of solar in the latest Integrated Resource Plan (IRP) for Electricity. And, for me, the headlines coming out of the IRP are that new wind and solar projects produce the cheapest electricity. This is the headline we need to spread! At the Energy21 workshop we heard from South Africa’s Council on Scientific and Industrial Research (CSIR), that the cost of wind and solar in South Africa are estimated at 4.4 U.S. cents per kilowatt hour, one of the lowest costs around the world.

Around the world, solar and wind are taking off at exponential scales. All projections of installed capacity made in the early 2000s are being shattered by 14 times for wind and close to 60 times for actual installed solar in 2015. Some see our Climate Action Agenda, to decarbonize our economies, as the biggest new business opportunity in the history of the world. here are the facts:

At COP22, Unilever CEO Paul Polman announced: “The Climate Action Agenda is an opportunity story and a development story at a time at which we need it most.” By bending the emissions curve through the rollout of renewable energy more jobs are created, health impacts are reduced and natural resources are protected.

More than ever we are aware of what is happening around us. Our interconnected lives through the digital age allow us to see and feel the changes around the world. This is helping create the movement that will define our time.

I am optimistic because we are a collective species, and we know that tackling climate change will take a collective effort. There is no silver bullet, but we all need to do what we can in our own spheres of influence. Be a climate leader in your own right. Biology has taught us that natural selection is not necessarily survival of the fittest individual, but survival of the fittest community.

Climate change is our species test, our chance to show that we are able to live in harmony with our world.

I am optimistic because Young People are leading the call for climate action and are spearheading the global movement. In 2014 more than 400,000 marched in New York, in 2015 they rallied in support of the Paris Agreement, and this year young filmmakers sent their message to COP22. We, Connect4Climate, ran the Film4Climate Global Video Competition, receiving 860 submissions from 155 countries, which presented a clear global call for climate action. The stories are of women-led bio-charcoal solutions in West Africa, of pay-per-use solar-entrepreneurs in Haiti, of electric vehicles and a desire to reduce meat consumption and protect our forests.

Overall it became clear that young people today want to be a part of the solution. They want jobs in the new climate economy. They want to see our economy transition and they want to be an active part of it. They find clean tech and low-carbon technologies exciting.

The average age in the Control Room during the Apollo Lunar Landing Mission was 26 years old! If young people helped bring us to the moon they will lead our energy revolution. Africa is the youngest continent in the world with a median age under 19 years. Let this be an opportunity to drive the narrative and economy for a renewable future.

Coming out of the Paris Agreement there is a real sense of optimism, that together we can shift our global emissions projection and build a more resilient future.

This is an exciting time, and I am excited to be a part of it. Like every great moment in history, today we are changing our world, and we will be remembered for it. Together we can build the social currency for our leaders to act on their commitments. We can prevent dangerous climate change!

In closing let me emphasize that your will to act is in itself renewable energy.