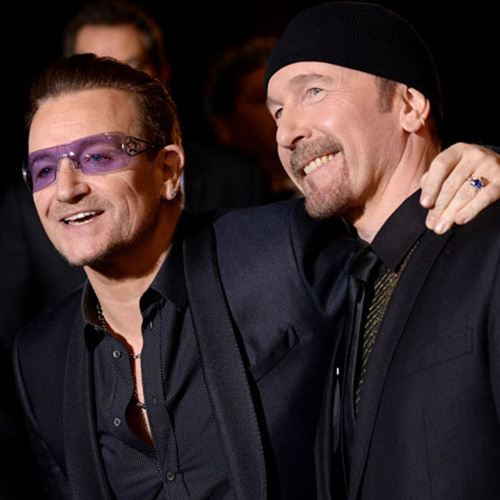 U2 singer and philanthropist Bono accepted the Palm Springs International Film Festival’s Visionary Award this week on behalf of U2. This is the first time the award was given to someone other than a filmmaker. Bono used the award acceptance opportunity to speak about his band’s advocacy work. The following is a transcript of excerpts of Bono’s speech, delivered at the awards gala on Saturday night.

HIV/AIDS has stolen so many lives in this country. 650,000 to be exact and 23 million lives outside of this country.

Now our leader in this campaign lost a son to the disease. His name was Nelson Mandela, the greatest activist of them all.

It’s ironic that by following an African’s example, American and European AIDS activists like ONE were successful in encouraging Democrats and Republicans here in the US to put aside their differences and work together on what is turning out to be the largest health intervention in the history of medicine. Thank you, America. You probably don’t know this, but there are now 10 million lives in the developing world saved by antiretroviral therapy, and American taxpayers have paid for about three quarters of them. Thank you, America.

7.8 million sentient souls are alive because of AIDS drugs that the United States of America paid for, and they are not just alive, but allowed to thrive, to have healthy kids, to be alive to raise those kids, to work, to contribute to their economies. And we’re at the tipping point — amazing to be able to say this — we are actually at the tipping point if we keep up the pressure.

We are within reach of declaring the first AIDS-free generation. What a thought. What a thought for this community. And it’s down to the activism of this generation, actors, directors, producers, musicians, but also students, doctors, nurses, priests, NASCAR drivers, soccer moms, CEOs, NGOs, politicians, people who just don’t normally hang out together not just hanging out together but working together. And that’s what it takes.