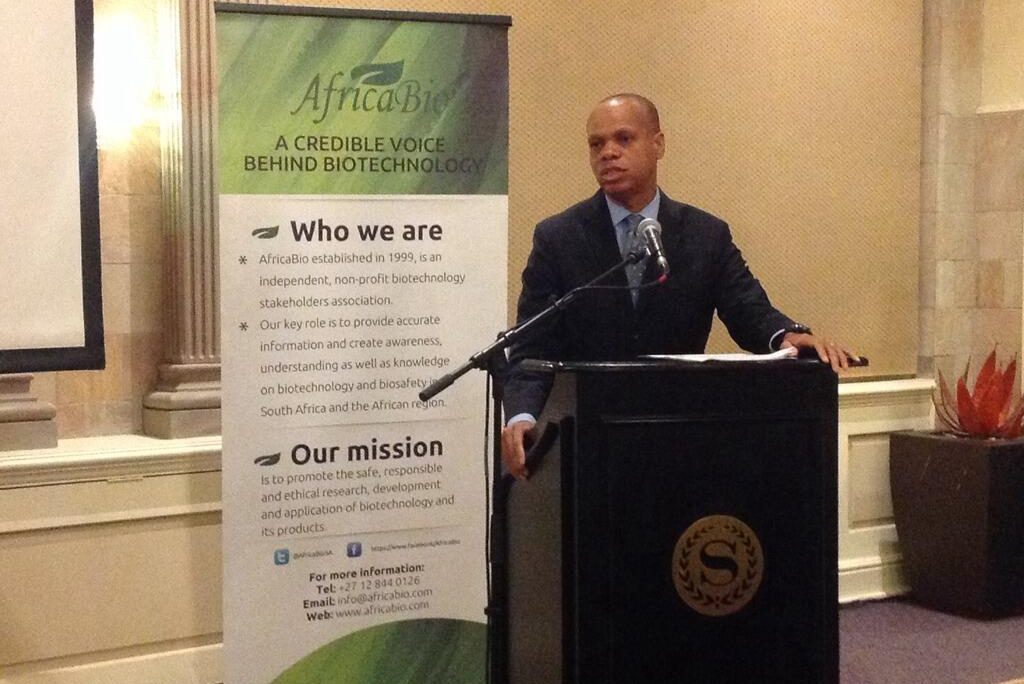 "With these new biotech varieties, farmers will ultimately be able to have access to another tool in their toolbox to make planting decisions and make important contributions to increase food security"

Good morning and thank you for that kind introduction and thank you Africabio for letting me come here today and talk about biotechnology and how it can benefit smallholder farmers.

I commend AfricaBio and the Southern African Development Community (SADC) for supporting this initiative to find ways forward towards the development of a regional policy on biotech crops. Having experts from South Africa, Argentina, Brazil, the United States, and the Common Market for Eastern and Southern Africa (COMESA) here today is a clear indication of the importance of this issue to us all. And it represents an exciting opportunity to share our positive experiences and lessons learned with this important technology.

As all of you know, food security will become a greater threat in the coming years due to population growth, resource scarcity, and climate change. You have already heard many times that the United Nations predicts that the world population will reach 9 billion around 2050. As the population grows, the demands for resources will increase, making things such as land, water, and fertilizer more scare for agricultural production.

There is also more buying power now than ever before on the African continent, as growing numbers of Africans with more disposable income increase their food consumption and diversify their diets. Several agricultural analysts expect consumer demand for grain and livestock products in Sub-Saharan Africa to grow by 18 billion dollars by 2020. The only way the region can meet the demand is by using advanced crop techniques and with new investment in agricultural production.

Climate change is already posing problems for farmers as weather patterns become more unpredictable. For example, the United Nations projects we will need to produce 70 percent more food by 2050 using less land, water, fertilizer, and fewer pesticides. Sub-Saharan Africa has great potential for higher agricultural output to meet this increasing demand, but will need access to safe and appropriate science and technology to meet agricultural challenges and consumer needs.

And we have also seen how biotechnology can save small farmers’ livelihood. For instance, in the 1990s, Hawaiian papaya farmers were faced with devastation from a plant disease that reduced papaya production by 50 percent within six years and just kept spreading. There were several attempts to deal with this pest, but nothing worked until one plant pathologies developed a biotech variety that was resistant to the virus, which ultimately saved our small papaya industry.

American farmers have readily adapted to the use of biotechnology, which they consider just another step in the evolution of food science. Think of people who used fermentation and leavening for alcohol and bread products over 10,000 years ago. There are also more recent advancements, such as Mendel’s pea that demonstrated the inheritance of certain traits in pea plants. We cannot forget Dr. Norman Borlaug’s Green Revolution, in which research, development, and technology transfer initiatives between the 1940s and the late 1970s helped increase agriculture production worldwide, particularly in the developing world, bringing food security to millions. In the case of biotech crops, the food safety record is unparalleled. After over 17 years of rigorous, science-based regulatory reviews and commercialization, assessment after assessment reaffirm that foods derived from biotech crops are as safe to eat as conventional foods.

Scientists around the world have studied and discussed the issue of the safety of biotech products. They have found no evidence that genetically engineered products are inherently unsafe. Prominent organizations, including the most prominent scientific bodies in the world – the World Health Organization, the British Medical Association, the United States National Academy of Science, the French Academy of Medicine, and others – have publicly announced their conclusions that biotech crops are safe to eat. On February 13, 2014, the International Service for the Acquisition of Agri-Biotech Applications reported that more than 18 million farmers in 27 countries planted biotech crops in 2013; 19 of these 27 countries were in the developing world. This represents a five million-fold increase in global biotech crop hectares in 2013 compared to 2012. Notably, according to the report, more than 90 percent, or 16.5 million farmers planting biotech crops, are smallholders.

For the second year running, developing countries planted more hectares of biotech crops than industrialized countries, representing the confidence and trust of millions of risk-adverse farmers around the world who have experienced the benefits of these crops. Remarkably, nearly 100 percent of farmers who try biotech crops continue to plant them year after year, the report notes.

The African continent has continued to make progress with South Africa increasing its biotech area by a record to reach 2.9 million hectares. In addition, Sudan joined South Africa, Burkina Faso and Egypt, to bring the total number of African countries commercializing biotech crops to four.

In Burkina Faso, women have benefitted from the introduction of Bt cotton. Growing Bt cotton requires less insecticide than regular strains. Practically speaking, this translates into fewer trips for these women and their children to fetch the water necessary for to mix and apply insecticide, saving them countless hours of effort and freeing them for other, more productive activities.

And we have seen several success stories right here in South Africa, as well. We are privileged to have one of those success stories in our presence today. I would like to acknowledge and commend Ms. Tepsy Ntseoane (en-tsee-oh-ah-ney), a South African small-holder farmer, on her growing success. I believe she will be addressing the conference later today and I hope she will share her experience in more detail with you then. Several years ago, Ms. Ntseoane received 539 hectares under South Africa’s land transformation policy, and started growing conventional maize in the early 2000s.

However, after several years of consistently low yields and problems with maize pests, she questioned whether to abandon maize altogether. Around 2008 she was introduced to biotech maize and it drastically transformed her operation, doubling the yields of previous years and dramatically reducing pest pressure. Her business has now expanded into vegetables, cattle, and she now has her own piggery. What a wonderful success story, and I hope we can create more of these success stories – not only in South Africa but throughout SADC.

In closing, it is clear that smallholder farmers stand to gain significantly in terms of productivity particularly once these biotech crops begin to include local staple crops such as cotton, cassava, maize, sweet potato, and sugar cane. With these new biotech varieties, farmers will ultimately be able to have access to another tool in their toolbox to make planting decisions and make important contributions to increase food security. Again, I congratulate and I thank you for the determination and the leadership behind these efforts to increase food security. I wish you a productive and successful conference.