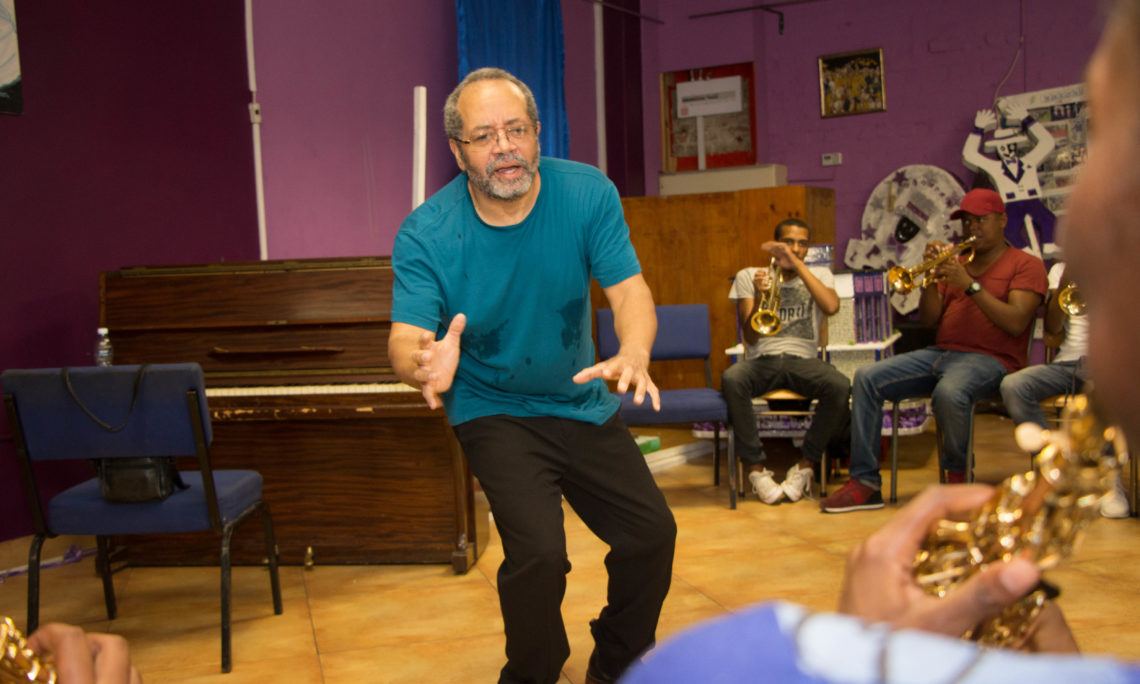 The U.S. Consulate General Cape Town brought American musician Nat Adderley Jr. to kick off this year’s Jazz Appreciation Month by participating in a panel discussion “on “The Music Business ” at the Cape Town International Jazz Festival (CTIJF), conducting workshops with young musicians around the city, and performing in and around in Cape Town throughout the week.

Adderley Jr. is a pianist who spent most of his career arranging music for Luther Vandross but returned to his roots, making a name for himself as a jazz musician in his own right. He is from a family of music greats, including his father, jazz cornet and trumpet player Nat Adderley Sr., and his uncle alto-saxophonist Julian “Cannonball” Adderley.

Adderley Jr. started his visit in the mother city at a workshop hosted by the CTIJF. Thousands of jazz lovers from across the country and overseas flocked to the city to listen to South African greats like Tsepo Tshola and Thandiswa Mazwai , but also American artists like the legendary group En Vogue and younger artist Andra Day.

The focus for the festival workshop was the “music business” during which Adderley Jr. told a packed hall of young musicians that “to be in this business, you had to love it.” Adderley Jr. talked about getting started in the business, how it was important to nourish your network of contacts and how social media was playing a key role these days. He also underscored that you don’t have to be a star to be successful, noting that he had never released his own album, despite his accomplishments in the field.

On Sunday, Jazz flowed onto streets of Gugulethu, as Adderley Jr. eased Capetonians into the week performing  at “Jazz in the Native Yards”. Popular Cape Town musicians – including percussionist Frank Paco, saxophonist Justin Bellairs, and bass player Peter Ndlala – played with Adderley Jr. on stage to an overflowing crowd.

Before his performance Adderley Jr. spent two hours working with young musicians from Gugulethu on music arrangement and the peculiarities of jazz. The workshop was a partnership with the South African Association for Jazz.

U.S. Consul General in Cape Town Teddy B. Taylor, who attended many of the workshops and performances, said jazz was America’s gift to the world.

“We were excited to have Nat Adderley Jr. play in Gugulethu and equally thrilled to support a program like Jazz in the Native Yards, such a vibrant community ,that highlights both the joy of music and the idea of music as an entrepreneurial endeavor ,” said Taylor.

Adderley Jr. also shared his skills with a minstrel troupe from Hanover Park. He had never heard a “moppie” (traditional minstrel song) or seen a “ghoema” drum before,  but he and the musicians, called ”The Pennsylvanians,” quickly created a new song to the beat of a ghoema drum.

On Tuesday the consulate and radio personality Shado Twala hosted a free jazz concert at the SABC auditorium in Sea Point, Cape Town.  He shared the stage with notable South African musicians–Darren English on trumpet, Lionel Beukes on bass and Kesavin Naidoo on drums. Over a hundred patrons came to watch in person and hundreds more watched online.

Adderley Jr. ended his week leading a workshop with the young stars of the Delft Big Band and finished in Langa where he jammed with his South African jazz peers linked to the Maboneng Township Arts Experience and their mentees.

“I don’t want to leave. I will stay here in South Africa,” said Adderley Jr. refusing to leave the marimba he was playing just a few hours before catching his flight back to New York.

For more on Jazz Appreciation Month and “business in music and the arts” follow the U.S. Consulate General, Cape Town’s new Facebook Page.