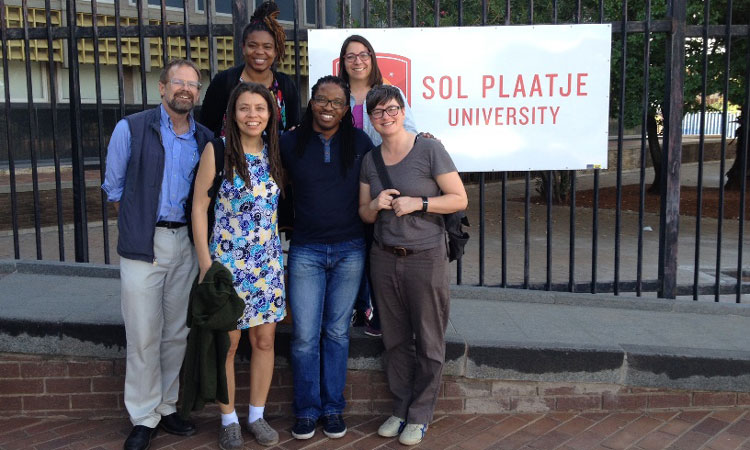 The creative writing communities in Cape Town and the Northern Cape city of Kimberley enjoyed a visit by award-winning American authors, poets, and playwrights in February 2016. Brought together by the Iowa International Writing Program (IWP) with support from the U.S. Department of State and the U.S. Consulate in Cape Town, the delegation engaged with aspiring, emerging, and accomplished writers in each city, sharing stories, swapping tips, and workshopping new writing.

In Kimberley, the group was warmly hosted by IWP alum and locally renown writer Sabata Mokae, who leads the creative writing course at the new Sol Plaatjie University.  They participated in a two-day creative writing seminar, alongside academics, students, and writers from the greater Kimberley area and beyond, engaging in robust discussion about topics ranging from the need to write and publish in more of South Africa’s languages and the future of creative writing in academia.  Radio Teemaneng amplified their Kimberley visit to a broader audience with daily morning interviews.

In Cape Town, the Artscape Theatre Centre brought together local playwrights for a conversation about the creative process, and both the University of Cape Town and the University of the Western Cape hosted dialogues with students. The writers led a productive playwriting workshop at the Masakhanye Art Room in Khayelitsha, and a storytelling workshop at the American Corner for youth reporters on telling nuanced stories around LGBTI issues.

The IWP tour in South Africa builds on their successful cross-cultural theater collaboration, entitled “Book Wings,” with local playwrights at the University of Iowa and the Artscape Theatre in 2015, as well as their connections with a growing number of talented South African writers who have participated in the International Writing Program fellowship in Iowa City. In addition to Sabata Mokae, previous fellows include Pieter-Dirk Uys, Kgebetli Moele, Maxine Case, Niq Mhlongo, Etienne van Heerden, and James Matthews.

For further information about the International Writing Program, see http://exchanges.state.gov/non-us/iwp