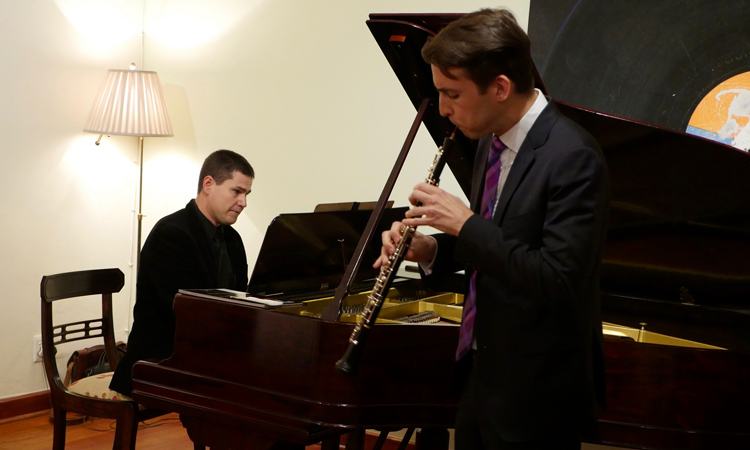 An affair of music, talent, and cultural exchange have brought together the interests of Carnegie Hall, the U.S. State Department and Strive Masiwa in what promises to be an incubator for classical music talent in South Africa. Last night, Ambassador Patrick Gaspard hosted a reception in honor of Carnegie Hall’s Decoda Residency Project, including a performance by South African Pieter Grobler (pianist) and American James Austin Smith (oboist).

Ambassador Gaspard praised the project, saying, “These types of artistic collaborations have shaped relationships between South Africans and Americans for decades, informing people in both countries in dynamic, creative, and compelling ways, about ‘the other.’ This was particularly powerful during a period of time when official relationships were strained. Through art, we were always able to communicate.”

The evening’s notable guests included acclaimed jazz musician, Hugh Masekela, who has previously graced the stage at Carnegie Hall and served with Ambassador Gaspard on the UBUNTU Music & Arts Festival in New York City. A true highlight of the UBUNTU Festival was the coming together of Masekela, Vusi Mahlasela, and Dave Matthews to celebrate 20 years of South African democracy and the end of apartheid.

A collaboration between Carnegie Hall, the Kwa-Zulu Natal and Johannesburg Philharmonics, the U.S. Embassy in Pretoria, and the Stellenbosch International Chamber Music Festival; Decoda also has founding support from Strive Masiyiwa and Econet Wireless. The reception marked the launch of a five-year, in-depth music performance and learning residency in South Africa. The Residency places special emphasis on providing young musicians with communication and engagement skills, enabling them to bring classical music to new communities and audiences.

Decoda is the first-ever Affiliate Ensemble of Carnegie Hall and Resident Ensemble in Creative Performance at the Guildhall School, London. It creates and advocates for meaningful musical experiences that are available to anyone, anywhere, regardless of circumstance.