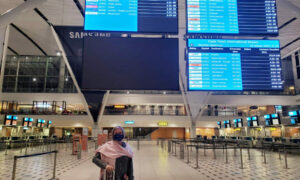 Upon arriving in Cape Town as the U.S. Consul General a little over three years ago, I knew it was one of the world’s most beautiful cities. And it felt weighty to have the responsibility to carry the mantle of over 220 years of diplomatic relationships between the United Sates and Cape Town. What I didn’t know was how profoundly and personally impacting it would be to be a part of one of the deepest and most enduring relationships that the United States has in the world. After three years, I can tell you that South Africa’s Cape provinces are full of incredible examples of how much our two nations can accomplish when we work together.

This cooperation is particularly important in times of crisis. When the COVID-19 pandemic reached South Africa, we worked hand-in-hand with the South African government and officials from all three Cape provinces to help thousands of U.S. citizens and South Africans return to their families and communities in the United States. Partnering with national and provincial governments, the United States gave more than 745 million Rand of support to South Africa’s COVID-19 response. This support provided ventilators and oxygen therapy treatment, purchased personal protective equipment, funded community healthcare workers, supported COVID-19 detection and surveillance, and contributed to the local production of facemasks.

Our joint response to COVID-19 built upon our close collaboration to an earlier crisis – the HIV/AIDS crisis in South Africa. Our two governments have been working together for nearly two decades to save lives in the Cape provinces. In fact, the work that we’ve done together on HIV/AIDS testing, treatment, and care through the U.S. President’s Emergency Plan for AIDS Relief, or PEPFAR, has built a platform of deep cooperation that allowed us to rapidly deploy resources in the fight against COVID-19. And while we won’t falter in combatting COVID-19 together, now more than ever we remain committed to saving South African lives through HIV prevention, testing, treatment and care programs. For me personally, hearing from teenagers living with HIV in the Eastern Cape who poignantly shared with me their hopes and aspirations for the future—due to their access to testing and treatment—will be one of the lasting memories of my three years here.

We also joined forces to combat the scourge of gender-based violence. Our efforts support clinics and care for those affected by gender-based violence, as well as funding training and exchanges to strengthen societal, legal, and health responses to this blight. I am particularly proud that the women who work at the U.S. Consulate General and the U.S. Men’s Rugby Sevens team joined up to speak out against gender-based violence in December 2019. If you haven’t seen the video yet, please take a look here.

After three years, I can tell you that South Africa’s Cape provinces are full of incredible examples of how much our two nations can accomplish when we work together, writes U.S. Consul General Virginia Blaser.
We are also investing in South Africa’s future. Our programs support aspiring entrepreneurs, help youth in the Cape provinces develop job-ready skills, and promote the technical skills necessary for survival in the 21st century. I am always delighted to visit the American Corner in Cape Town and see a room full of young South Africans, who are learning, collaborating, and dreaming big. Or to watch the Northern Cape’s brightest young minds proudly use a U.S. government-donated 3D printer to make futuristic tools using their math and science skills. These investments into individual lives are often unseen because they do not come with ribbon cuttings or formal ceremonies, but I believe they can be life-changing and extend across generations.

Besides our investment in the people of South Africa, we also invest in the economy, and our trade and commercial ties have grown significantly in recent years. Bilateral trade between the United States and the Western Cape is reciprocal and valued at almost 17 billion Rand—a 335% increase since 2001. The United States is the top foreign direct investor in the Western Cape and U.S. private sector investments have created over 10,000 jobs in the province in the last 15 years. U.S. companies—big and small—invest in all three Cape provinces, create jobs, and contribute to local communities. There are also now two direct flights between Cape Town and the United States. These flights narrow the geographic distance between the United States and South Africa, enable new connections, and further expand opportunities for trade, tourism, and investment—all of which are increasing.

The last three years have been among the best of my 32-year diplomatic career. I enjoyed beautiful landscapes across all three Cape provinces, sampled South African delicacies, and made lasting memories experiencing South Africa’s diverse cultures and traditions. But most of all, I treasure the genuine friendships I developed with so many kind and generous (and outspoken!) South Africans. Although in this COVID-era I will have few opportunities to say a proper, in-person farewell, I leave knowing that the relationship between the United States and South Africa is stronger than ever and poised for even more success.

It has been an honor and privilege to serve both the United States and South Africa in this special role. I am humbled by the many wonderful friendships offered to me, thankful for the many chances to grow as a diplomat and as a person during this posting, and comforted by the enduring presence the Cape now has in my heart.

Signing off, one last time, as the U.S. Consul General to Cape Town… a fond farewell to you all. May we meet again…