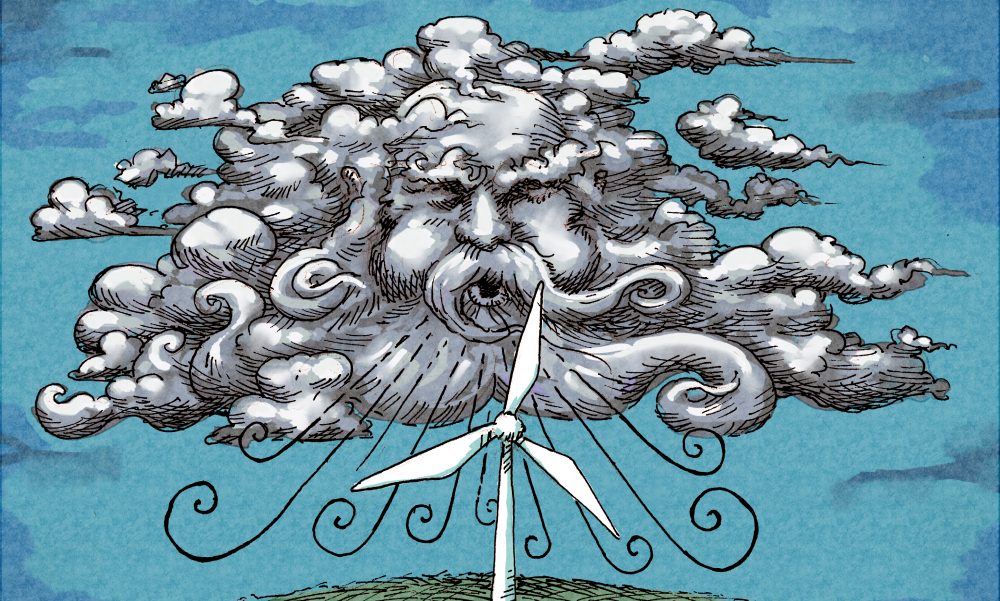 Like most technologies, wind energy has improved with age. Today’s wind turbines are far better and more efficient than ever before.

How do you get electricity when the wind isn’t blowing? When wind turbines are part of a utility network, there are many ways to compensate for low production times: Smart grid infrastructure, energy-efficiency measures tied to consumer demand, and better weather forecasting all reduce the need for extensive conventional backup. New, more efficient energy storage such as high-capacity batteries allow electricity generated by wind to be saved for later use.

In the past decade, wind energy technology has improved so that mechanical noise is minimal. Turbine blades produce a “whoosh” sound similar to the wind. Typically, wind turbines are placed no closer than 300 meters from a home. At that distance, the sound level is about 43 decibels. At 500 meters, it drops to 38 decibels, less than moderate rainfall (50 decibels). A refrigerator produces about 40 decibels, while a blow dryer creates 80 to 90 decibels.

4. Wind turbines kill bats and birds and harm the environment.

Yes and no. It is true that birds and bats can fly into turbines, but those concerns led the industry to take steps to protect them. U.S. wind farms have worked with wildlife and environmental groups and the U.S. Fish and Wildlife Service to lessen the impact of wind farms on wildlife. Siting wind farms where there is less risk to wildlife is important. Slowing the turbine startup speed significantly reduces bird and bat deaths. Knowledge of wildlife behavior is a key to preserving bird and bat populations. For instance, bats are active when wind speeds are low, so keeping turbine blades motionless at those times can cut bat deaths in half with minimal production loss. Sound deterrents, radar and thermal imaging are other tools being tried to protect wildlife.

Wind energy is nonpolluting and beneficial for the environment.

5. Wind is an insignificant power source.

As of 2017, wind is now the largest single clean-energy source in the United States, outpacing hydroelectric power in installed capacity. Wind energy generation is growing in windy states, notably Texas, and across the Midwest. The first U.S. offshore wind farm was completed in 2016. Wind is among the fastest-growing renewable energy resources. The U.S. Energy Information Administration estimates that 60 percent of all utility-scale generation capacity added to the power grid in 2016 came from wind and solar resources.

And a few facts …